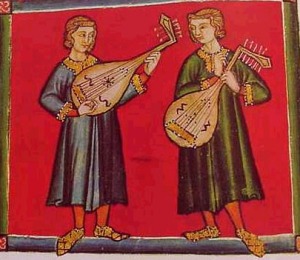 As the beginnings of this story lie in the distant past, many details are unknown as to how the lute disseminated throughout medieval Europe and rose to prominence, and are likely to remain unknown. It’s generally accepted however, that the lute came to Europe through Spain and Sicily from Muslim conquerors during the Middle Ages, and thence disseminated to the rest of Europe. There is some tradition, or fancy, that lutes – ouds – were brought to Europe by crusaders returning from the holy land in the 12th and 13th centuries (which is possible and perhaps even likely) but crusaders returning from the wars are not as likely to have brought back skill and expertise in playing as well as the instruments themselves.

Even the name of the instrument comes from Arabic: both lute and oud derive from العود (al- ‘ud) “the wood”. The modern oud – like the lute – has evolved and changed from its medieval ancestor but initially they were the same instrument, which eventually Europeans adapted and developed for their own purposes. 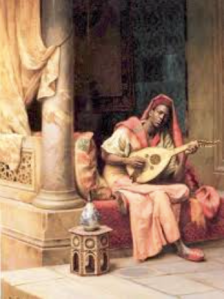 The Iberian Peninsula was conquered by the Berbers in the early 8th century, and Islamic culture held sway over Al-Andalus (formerly Hispania under the Romans) for several hundred years.  The Emirs (and later Caliphs) of Córdoba encouraged the spread of commerce and culture, and it was at the court of Emir ‘Abd al-Rahman II of Córdoba that the first prominent figure in the lute’s introduction to the West whom we can name appears.

Abu l-Hasan ‘Ali ibn Nafi’, known as Ziryab (“black bird”) lived from 789-857 and spent his early career at the Baghdad court. Ziryab was reputedly of African or mixed Arab/African heritage and was a polymath, excelling at a diverse variety of pursuits including of course, music. Ziryab arrived in Córdoba in 822 and introduced innovations and practices in music and lifestyle – including fashion and clothing, cuisine, hairstyles, hygiene, furniture, and more – that had long-lasting effects not only at the court of Córdoba but throughout the Islamic world (and in the West as well, albeit with far less attribution or fanfare).

Ziryab is credited with adding a fifth string (or pair of strings?) to his oud (previously the oud had only four) which was red (perhaps a gut string “loaded” by soaking in a metallic solution), to have composed many songs, and to have founded a school of music in Córdoba – one of the first or the first music school in the West.  Today he is considered to be the founder of Andalusian classical music.

Alfonso the Wise as a judge, from his Libro de los Dados, circa 1280

From Al-Andalus and Sicily to Italy and the Continent

Both the medieval oud and the medieval lute were played with a plectrum and apparently using identical technique, although depictions of the lute in medieval Christian iconography do not make their first known appearance until the 13th century, in the voluminous illustrated manuscript Cantigas de Sancta Maria of Alfonso the Wise (Alfonso X of Castile 1221-1284) which catalogs over 400 poems with musical notation (monody) mostly praising miracles attributed to the Virgin Mary.

Culture and learning flourished at Alfonso’s court in a tolerant atmosphere in which Christians, Jews, and Muslims all contributed. One can easily imagine Muslim and Christian musicians working together as a concrete example of how the lute and the technique to play it were passed from one culture to another.

While the lute is thought to have first come to Europe through Spain, the introduction of the instrument at the courts of the Muslim rulers of Sicily beginning in the 10th century is likely the avenue by which the lute made its way to Italy, and through Italy to the rest of the continent. The Muslim rule of the Emirate of Sicily lasted from 831-1072, and saw the infusion of many aspects of Arab culture to the life of the island that remained after Christian governance resumed. 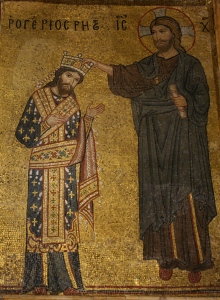 The Norman King Roger II (1095-1154) united most of Southern Italy into the Kingdom of Sicily. Under his direction the Cappella Palatina was erected in Palermo, Sicily by 1140. Paintings on the ceilings of the Cappella Palatina depict dozens of musicians and musical instruments, including many lutes and lutenists. The Sicilian court promoted a wide variety of cultural influences from the Normans, Greeks, Arabs, and even Byzantines who contributed to its population. During the 12th, 13th, and 14th centuries, visitors from mainland Italy brought back reports of the rich musical life there, eventually importing the instrument itself, and the lute had become established as a popular instrument among Italian minstrels by the 14th century.

lutenist on the ceiling of the Cappella Palatina, Palermo

Musicologists are divided on how much Arab music itself influenced European music when the Arab oud became the European lute. The context in which the instrument was played and the technique involved seem to have remained the same: the four- or five-course medieval European lute was played with a plectrum, and like other string instruments popular in the medieval period – plucked instruments like the citole and gittern or bowed like the vielle and rebec – it was used as a melodic instrument.  A lutenist would pluck out a single melody line on his instrument, perhaps in duet with another lutenist or musician playing another instrument, or to accompany a singer. It is likely in fact, that the medieval lute’s primary employment was as an accompaniment instrument for singing, which was its primary use in Islamic music. However, the extent to which Arab musical style, form, and structure – in all manner of details down to the scales and pitches involved –  influenced European style is debatable. Song accompaniments may have been improvised or passed down aurally – or some combination of both, as due to the lack of any surviving medieval music for lute, what exactly lute music from this period was like is for the most part conjecture based on what we know about vocal music and music for other instruments.

“Where as with harpes, lutes, and gyternes,
They daunce and pleyen at dees bothe day and nyght”

By the 14th century, the lute had made its way to England, France, Germany, and Austria. Lutenists were employed by the kings of England beginning with the reign of King Edward I in the 13th century and the tradition of employing lutenists at the royal court in England continued for centuries. In France, the lute was slower to gain in popularity – the giterne and harp were well-established, and it wasn’t until the fifteenth century that the lute is known to be employed with certainty.

In German-speaking countries musicians began to play the lute with more proliferation than in France – many German musicians were employed at the Sicilian court of Manfred (1232-1266) and doubtless at least some of them brought the instrument back to their homelands.

By the end of the 14th century, the lute had spread beyond Italy – where it was fast becoming the favorite instrument of the new humanist movement that would become what we now know as the Renaissance – to be heard throughout the continent not only at the courts of royalty and the nobility, but as the instrument of itinerant minstrels and householders alike.