Singing canons is a wonderful way to help young singers develop independence, sing harmony and polyphony, and all with material that takes much less time to learn than music cast in more than one part. In strict canon, everyone sings the same part: we all learn the same melody and text together, and once it’s solid split up the group, start singing it at different times, and presto! musical magic.

Canons can be simple enough for very young children to learn in a few minutes or so challenging that professional choirs must exert considerable effort to sing them well. With a broad repertoire of canons on the tip of her tongue, the skilled music teacher is ready to make or teach satisfying music with students of any level, for any occasion, at any time or place.

Over the course of my teaching career I taught dozens of canons to students of all ages: rounds with students beginning in Kindergarten, catches with more experienced singers (usually by third grade). We sang canons about everything: happy and sad canons, silly canons, canons about love, animals, God, food, about music itself. Canons in English, Latin, French, German, Russian. Canons. One of the most important canons I tried to teach to all of my students over the years is the ancient Sumer Is Icumen In, which I have written in detail about here.

Another fabulous canon which I taught to hundreds of students from elementary through high school, and which is the subject of today’s article, is the indignant and difficult “chiding” catch Fie, Nay, Prithee John by the great Henry Purcell. And yes, by teaching this song, I taught my students to swear.

Fye, nay, prithee John,
do not quarrel man,
let’s be merry and drink about.

You’re a Rogue you’ve cheated me,
I’ll prove before this Company,
I caren’t a Farthing Sir
for all you are so stout.

Sir you lye, I scorn your word,
or any man that wears a sword,
for all you huff who cares a T___,
or who cares for you.

Among Purcell’s many musical pursuits, he clearly enjoyed composing challenging canons, and singing them at drinking parties with friends. He wrote more than fifty of these musical jokes and novelties – catches with witty, funny, and sometimes downright filthy lyrics. Purcell and his friends, including fellow composer and companion in musical debauchery John Blow (1649 – 1708), published two books of these catches in the last decade of the 17th century: The Catch Club or Merry Companions ( in two volumes). 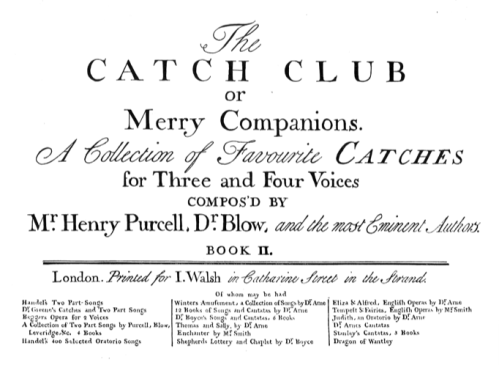 Most of these catches are definitely not suitable for educational purposes, or at least for children. For one thing, many of them are quite challenging to sing. And while some are on texts that are innocent enough – praising music or satirizing politics of the time in thinly veiled allegories – some of them extol the pleasures of booze and drunkenness, and many of the texts are nothing but humorous and blatant sexual innuendo. For instance, No. 28 in Book 1 is accompanied by the explanation “Maid Mary haveing broke the handle of her hair broom and hearing that (Man John) had a long stick wou’d fitt it desir’d him to put it in for her. by Mr. Eccles”:

My Man John, had a thing that was long,
My maid Mary, had a that that was

Wait, on second thought I am not going to print any more of that lyric.

Fie, Nay, Prithee John as it appears in The Catch Club, c.1690 (click to enlarge)

Fie, Nay Prithee John is No. 118 in Book 2, and is prefaced with the description “A chiding Catch by Mr. Hen: Purcell.” The short text describes an argument, presumably in a tavern or public house, includes insults, and ends with curses.

I was originally taught this song by Margaret Flinsch, who was the founder and director of Blue Rock School. Mrs. Flinsch was known to everyone at Blue Rock – adults and children alike – as “Peggy”, and she was already in her late eighties when I taught there 1991 – 1995. Peggy’s influence on Blue Rock’s philosophy and curriculum featured many songs and stories from her own childhood, including this rather rambunctious song. I vividly remember Peggy teaching me Fie, Nay, Prithee John by rote in the car one winter morning in February or March of 1991, as I drove her from her home in White Plains to the school. We sang it in (two-part) canon together as we crossed the Tappan Zee Bridge immediately after a snowstorm. Peggy’s voice was high and clear, and although thin due to her age, remarkably accurate with a narrow and elegant vibrato.

This is not a song for your students to perform. I taught it to most of my students over the years, but we never sang it in public, and as a result I unfortunately have no recording of any of them singing it. I have been unable to find a satisfactory recording of it on the internet that resembles how I hear it in my mind’s ear – beautiful clear voices negotiating the challenging leaps in the melody with precision and gusto!

The next to the last curse in the original text is “who cares a T___”. Presumably, this blank was to be filled by the singers with the word “Turd”, which makes sense but begs the question of whether the word Turd was so shocking as to be unprintable in the late 17th century. Really?

I have seen this phrase replaced by “Who cares a fig?” in one songbook that included Fie, Nay, Prithee John among its contents. However, I have always sung this song with the words Peggy taught me by rote, which replaces the original penultimate curse with “Who gives a damn?” This edit is completely in the spirit of the original lyric yet updated for contemporary singers, and is also enormously satisfying to sing.

“Who gives a shit?” is probably the most accurate update to this lyric, but I was never brave enough to teach that.

Fie, Nay, Prithee John with updated lyric, transposed down a minor third to more easily bring it within reach of young voices. The range of this piece is an octave + a sixth (a common range for most of the best catches). Here are downloadable PDF files, free to print, copy, and distribute to your students:

The second version has solfège syllables in the place of the lyrics. An occasional teaching strategy of mine (always done as a surprise) was to give high school students music already marked in solfège, to save them the usual first step for learning new music in my choir program. For more information on why you should use solfège and how to incorporate it into your classroom start here.

For pre-teen and teenage singers, to not only be allowed to swear but to be taught to do so by their music teacher in a song at school was a novel experience. Fie, Nay, Prithee John was very popular with all of my students, from elementary through high school.

I taught the melody first on solfège, then moving to text once the notes were mastered. The second phrase has a challenging sequence of falling sixths to sing, and the third phrase, after outlining the tonic triad, is a sequence of five falling seventh chords each a step lower than the last. Without the words, Fie, Nay, Prithee John is a fine warmup for any choir.

Add the words and a new dimension of bluster and attitude transforms this cleverly constructed canon into a twelve-measure masterpiece. Once everyone has mastered the canon, divide your group into three parts. After singing once through with the entire choir in unison, bring in one part at a time and carry on the argument until each part has at least begun the piece twice, then end with all three parts in full voice on the half note at the cadence!

This is NOT what any of my choirs ever sounded like, but it’s amusing nonetheless.