After paging through the books indicating pieces that would be appropriate for me to begin my study of Francesco’s music with, Pat recommended that I transcribe them into French tablature (in Ness’s book they are printed both on the grand staff and in the original Italian tablature notation) and sent me home with both volumes.  For the next several weeks in the evenings I sat at the kitchen table, transcribing the pieces Pat had marked – and many others. More than twenty years later, these pieces still form the backbone of my repertoire of 16th century Italian lute music.

Little known today, Francesco da Milano was once the most influential and renowned lutenist in Europe, and in fact Francesco is the first great instrumental virtuoso and composer in the history of Western music. He is first in a long line of composer/performers of instrumental music that includes Mozart and Beethoven – his descendants and heirs – and many others down the centuries, whose music was so powerful and important that it disseminated beyond national boundaries and influenced contemporaries as well as succeeding generations of musicians.  His countrymen called him il divino (the divine), the epithet he shared only with his contemporary (painter, sculptor, architect) Michelangelo. 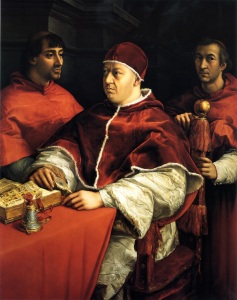 Francesco Canova da Milano was born near Milan in 1497. His father Benedetto was also a musician and Francesco was precocious, performing alongside his father in service to Pope Leo X in Rome from 1516-1518, and beginning to draw a regular salary from the Pope in 1519.

Pope Leo X is probably most remembered today as the Pope against whom Martin Luther struggled – Luther published his Ninety-Five Theses in 1517 to protest Leo’s selling of indulgences to raise funds for the construction of St. Peter’s Basilica.  The conflict escalated resulting in Leo’s excommunication of Luther in 1521, ushering in the Reformation.  Francesco lived in heady times – and he was right there in the thick of it, providing music for the high and mighty and garnering praise for his miraculous lute playing throughout Italy and eventually, all of Europe.

Francesco served three popes in all: Pope Leo X from around 1516 until this pope’s death in 1521, followed by a hiatus from the Vatican during the brief reign of Adrian VI, who was rather more pious than Leo and not a great patron of the arts. By 1524 Francesco had returned to the service of the papacy under Pope Clement VII (like Leo, another de’ Medici) and there are several accounts of his playing in Rome up until 1527, when it is thought that he left the city before the infamous Sack of Rome by the Imperial troops of Charles V (the Holy Roman Emperor) on May 6 of that year.

After some years in Milan and Venice, Francesco returned to Rome by the early 1530s – first in the service of yet another de’ Medici, Cardinal Ippolito – and following the cardinal’s death in 1535, he entered papal service for the third time at the court of Pope Paul III.

The Truce of Nice, 1538 by Taddeo Zuccari – Francis I (l) and Charles V (r) shake hands; Pope Paul III is between them (Click to enlarge)

An illustrious story from this time recounts that Francesco accompanied Paul III to Nice in June 1538, where the pope brokered the Truce of Nice. Francesco played for both Charles V and King Francis I of France (presumably in separate performances, as the two monarchs hated each other so bitterly they refused to be in the same room together). King Francis gave Francesco 225 livres – a small fortune – as a reward, and the account of the transaction in the king’s payment book mysteriously leaves open the possibility that Francesco may have been in the service of Francis I during previous years when it is uncertain where Francesco was employed.  The French King was an enthusiastic patron of the arts, and employed many of Francesco’s countrymen including Leonardo da Vinci and lutenist Albert de Rippe.

Shortly after his trip to Nice Francesco returned to Milan where he married Chiara Tizzoni, who gave birth to a son in April 1540. Francesco and Benedetto are recorded as playing in the Pope’s service again in 1541. On January 2, 1543, Francesco da Milano died; the cause of his death is not known. He was 45 years old.

Francesco was buried at the Church of Santa Maria della Scala in Milan, which was demolished in 1777 and is now the site of the opera house known as La Scala.

woodcut (is it Francesco?) from Intabolatura de leuto de diversi autori published at Milan in 1536 by Giovanni Antonio Casteliono (known today as the casteliono lute book)

Francesco’s surviving works fall roughly into two categories:  fantasias or ricercars (named seemingly interchangeably in the sources) and intabulations of vocal works by other composers. The fantasias and ricercars are freely developed counterpoint essays for lute – some more improvisatory in style while others exhibiting a more rigorous formal structure – and the intabulations are arrangements of both sacred and secular vocal works, ranging from faithful, literal  translations of these works for lute to some featuring embellishments that depart considerably from the original vocal models. Apparently Francesco was best known to his contemporaries for his intabulations – some musicologists believe the primary reason lutenists discarded the plectrum at the end of the 15th century was to gain the capacity to play the multiple melodic lines of (popular) choral works – whereas it is his fantasias/ricercars that illicit the most interest of lutenists and musicologists today.  There also survives a small miscellany of pieces by Francesco, including a canon and a duet for two lutes, and numerous pieces of dubious or uncertain attribution. 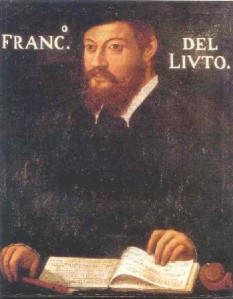 Arthur Ness gathered more than 90 fantasias (and ricercars) and about 30 intabulations for his 1970 collection, and more pieces attributed to Francesco have come to light in the last 45 years. As such, Francesco’s is one of the largest bodies of instrumental music to survive from the Renaissance, and his music contains a surprising variety of mood and structure, as well as difficulty – while some of his pieces are approachable to the beginning or intermediate lutenist, others will push the player to the limits of his technique.

The video above is the first of a series of five that together comprise a full recital of music by Francesco da Milano performed by the English lutenist Nigel North in 2012.   Nigel concentrates primarily on ricercar and fantasia in his selections here – he plays only two intabulations – including pieces that present a wide variety of emotions – some are light and dancelike while others are more contemplative or even somber.  Throughout many of these pieces, Francesco uses imitative counterpoint techniques from the (vocal composition) style of Josquin des Prez (c.1450/1455 – 1521), who was widely regarded as the paragon of composers in the 16th century. Josquin spent time in Milan in the 1480s, and sang in the papal choir at the courts of Popes Innocent VIII and Alexander VI in the 1490s – Francesco was certainly familiar with Josquin’s oeuvre (he intabulated some of Josquin’s motets) and his tenure at the Papal courts brought him into contact with many educated musicians and a broad repertoire of polyphonic music, all of which undoubtedly assisted Francesco in the development of his style, 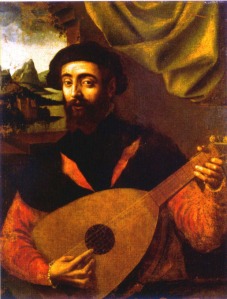 No autograph manuscripts known to be in Francesco’s hand survive, nor records of anything he said, and scant indications of his personality save what may be inferred from his music.  No authenticated portraits exist either, although scholars posit several images from early 16th century Italian sources as possible portrayals of Francesco. All of these inevitably are of a bearded man with dark hair, wearing a small cap.

Lute pieces by Francesco da Milano appear as Italian, French, or German tablatures in more than forty printed sources and more than twenty manuscripts from 1536-1603 originating in Italy, France, Germany, Spain, Switzerland, and the Lowlands.  Musical tastes and styles changed over the course of the 16th century, and it is a sign of the high esteem in which Francesco’s music and reputation were held that it was still being played and disseminated several generations after his death. In particular, Francesco was at the forefront of the musicians who established the lute as a vehicle for polyphonic composition in the early 16th century of the Italian Renaissance – the Cinquecento – and he was the first to leave behind a substantial body of work as well as an international reputation.

Over the last twenty years I’ve had fallow periods in which other demands kept my lutes in their cases, sometimes for months at a time.  Always it is Francesco’s music I turn to first when I pick up the instrument again – inevitably the first piece I play once I’ve managed to get the thing in tune will be the ricercar Arthur Ness numbered 4, which was one of the first pieces I memorized when I began to play lute.  There is an immediacy to Francesco’s music which stills moves and attracts me, a palpable delight in life and music which enlivens many of his pieces, and a depth of expression in some which belies their modest scope (by contemporary standards). It is precious to me that nearly 500 years later, it is possible to play and hear this music from a time and place so different from my own, and feel a connection however tenuous with such a musician.

By walterbitner in Early Music, Music, Renaissance, The Lute on October 15, 2015.
← The Brandenburg Concertos How to Teach Recorder Fingerings →