Matthew Halls on J.S. Bach and the Oregon Bach Festival

Continued from An Interview with Matthew Halls (Part 1) 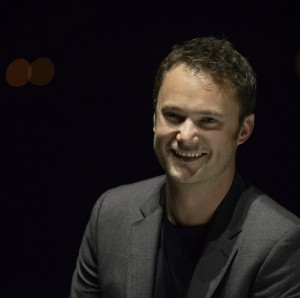 I asked Matthew Halls what he felt about dramatizations of the Bach Passions – for example, the stagings of the St. Matthew and St. John Passions by Peter Sellars with the Berlin Philharmonic.

Matthew Halls: I have many different feelings on this. The work that Peter Sellars did with the Berlin Philharmonic is wonderful – it’s inspiring, it gives you a new insight. I also saw an incredible realization by Deborah Warner (with the English National Opera), and Katie Mitchell’s done some work in this field as well. There seems to have been a trend in recent years to give dramatic presentations of Bach’s great sacred works.

Fundamentally, I have nothing against this. Any way we can present music from the distant past in a way which is going to make the presentation of the ideas more vivid for someone coming to see the piece for the first time: that gets a big gold star in my book! That a wonderful way of helping and reinterpreting the music of the past.

I think that it comes with the acknowledgement that I’m not quite sure what Bach would have made of it. But at the same time – this is the 21st century and we face different challenges. As long as the integrity of the music survives then I’m really interested and excited by all sorts of approaches to the music.

END_OF_DOCUMENT_TOKEN_TO_BE_REPLACED

“I just adore it.” says Roger Wiesmeyer, speaking of Mozart’s Piano Concerto No. 24 in C minor, K. 491. “I’ve never played it on piano before. I’ve sat in the orchestra for performances of this concerto three or four times and every time it just completely captures my imagination, for at least the week after – I’ll have at least two weeks of living with it and thinking about it all the time. There is this incredible mood that Mozart casts with this piece.”

A few days ago Roger and I sat down after a rehearsal to talk about this piece, which we will be collaborating together to perform this week.  Roger will be performing the solo piano part – the part originally played by Amadeus himself – and I am playing a reduction of the orchestra’s part on second piano for the first and third movements.  The second movement – a slow Larghetto – will be performed by Roger joined by Nashville Symphony musicians Kate Ladner, flute; Jeremy Williams, violin; and Keith Nicholas, cello in a quartet arrangement by Johann Nepomunk Hummel, an Austrian composer and pianist who was a contemporary of Beethoven.

END_OF_DOCUMENT_TOKEN_TO_BE_REPLACED

Music Education and the Whole Child

This weekend I attended a chamber music recital presented by a small local community music school. Roughly twenty students from middle and high school presented an hour of short pieces for small ensembles: music for woodwinds and strings, with a couple of pieces featuring voice as well. The students represented a wide range of experience, accomplishment, and commitment; some of these children will go on to study music in college and perhaps even pursue professional careers as performers or educators, while others will likely put their instruments away for good by the time they graduate from high school.

Regardless of the differences in commitment for the students and their families – to say nothing of the teachers – all of them clearly regard music as an important part of their lives.  Parents make it possible for their children to attend weekly lessons and regular ensemble rehearsals, have the instruments and other materials they need, and the students must exert consistent effort over a long period of time (years) to learn how to play their instruments and develop at least enough acumen that they derive satisfaction from the process.

Why do they do it?