The earliest surviving example of the melody is from a manuscript dated c. 1400 in the Leipzig University Library. It was published in Geistliche lieder auffs new gebessert zu Wittemberg (1533), one of the earliest Lutheran hymnals, and survives in settings by a number of composers including Michael Praetorius, Dietrich Buxtehude, Georg Philipp Telemann, and J.S. Bach. It was also published in Piæ Cantiones, a collection of medieval Latin songs published in Finland in 1582. Piæ Cantiones, through a circuitous path, introduced several carols to the Christmas traditions of English-speaking countries in the mid-19th century.

There are many versions of the carol which maintain the macaronic alternating lines in Latin but translate the original German into English – a comparison and discussion of some of these can be found here. I chose to use the two versions printed in The Oxford Book of Carols with my students, which is yet another translation of the German into English by S.P. (the OBC editors are rather mysterious about who this stands for) – I preferred this translation as it is lighter in tone and less religious than the aforementioned.

This is a recording I made with 4th, 5th, and 6th grade students at Linden Corner School in Nashville in 2005.  Linden Corner was (and is) a small school with one class per grade level, and the (unauditioned) choir heard here consisted of every student in those grades, who had been working with me for about a year when I made this recording. The choir is accompanied by a string quartet comprised of 6th grade students.

The choir sings the soprano part of the carol in unison, and the quartet performs the SATB harmonization of the carol in two versions: the first two verses as harmonized by Bartholomew Gesius (1601), followed by the quartet alone performing J.S. Bach’s harmonization, and finally, the choir joins the quartet for the fourth verse – again, in Sebastian’s arrangement. I did not have the choir sing the third verse as the English words are the most religious (about sin) and least uplifting of the four – instead, the quartet plays Sebastian’s setting as a special instrumental verse. It is well worth hearing twice. Here is a PDF of the adaptation I made for us to work from, combining both settings into one score:

It seemed more natural to have the students sing the first two verses at rather a faster clip than many of the more reverent and “churchy” performances you will hear in other recordings, and then adopt a more stately tempo for Sebastian’s setting, as it was more difficult for the student instrumentalists to play than Gesius’s harmonization, and allowed them to dwell on the dissonances a little bit longer.

Listening to this recording more than a decade later, there is something touching and moving to me in the sound of these earnest, rather unpolished young voices singing this ancient carol.

This arrangement – combining settings by both Gesius and Sebastian from the OBC – is the rather traditional way my students have performed In dulci jubilo. I have also done the same arrangement with elementary school students using a student (SATB) recorder quartet instead of strings:

This works surprisingly well, despite the fact that the instruments are all at four foot pitch – the effect is very similar to that of a portativ organ.

In a high school Winter Solstice performance, my younger mixed choir also performed this arrangement with a student string quartet, the only difference was that instead of the choir singing only the soprano part in unison, students sang all four parts, and we used the piece as an opportunity to practice (learn) singing from SATB score. 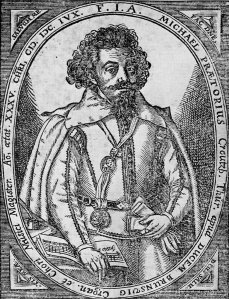 Many composers – especially German composers – over the centuries have been captivated by In dulci jubilo, and there are numerous settings of the piece in a variety of approaches for the adventurous to explore.

Michael Praetorius (1571 – 1621) – whose prolific and versatile career as a composer, organist, and academic straddled the transition in musical styles from the renaissance to the baroque – included an elaborate and beautiful setting for double choir in his collection Polyhymnia Caduceatrix & Panegyrica (1619):

Dietrich Buxtehude (1637 – 1707), whom Sebastian famously walked 250 miles to hear play the organ, wrote a chorale prelude for organ on In dulci jubilo, as well as this rather stately (and ponderous) setting for choir, organ, and violins:

Carrying on the tradition, Sebastian’s good friend and contemporary Georg Philipp Telemann wrote a more extended cantata on In dulci jubilo for a quartet of soloists, choir, strings, and continuo in fine, full-blown high baroque style:

Our friend Sebastian wrote several settings of In dulci jubilo, including works for organ as well as the harmonization for the last verse provided above. The chorale prelude, BWV 729, may be the most celebrated and most often performed: