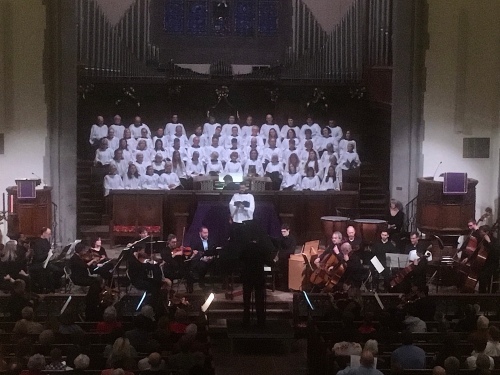 When I first met Dr. Matthew Phelps nearly two years ago, one of the first things he shared with me was his desire to present Sebastian’s Christmas Oratorio BWV 248 at West End during the advent season. I was excited to hear this, since the Christmas Oratorio is rarely performed compared to Sebastian’s other large scale choral works like the Passions and the B minor Mass, and I had never heard it performed live before. So when I found out earlier this fall that it was happening this year, I marked my calendar and made sure I could be there.

The Christmas Oratorio is actually a sequence of 6 cantatas that tell the story of the Nativity from the Birth of Jesus to the Adoration of the Magi. Sebastian composed the work for the Christmas season of 1734-1735 in Leipzig, when it was first performed: one cantata for each of 6 feast days from December 25 through January 6.  He was 49 years old. Much of the music is an ingenious use of “parody” technique: recasting music from previous works with new texts and context. Sebastian chose some of the music from 3 secular cantatas he had written in the year or two previously, and a church cantata (now lost). The first and last cantatas that comprise the Christmas Oratorio each also incorporate the famous chorale melody O Haupt voll Blut und Wunden from the St. Matthew Passion.

Each of the oratorio’s 6 parts is scored for a different instrumentation. Sebastian makes use of a variety of instrumental timbres for dramatic and text painting effects – especially oboe family instruments in all 6 cantatas, which are used to evoke a pastoral mood and setting for passages featuring the Christmas story’s shepherds. 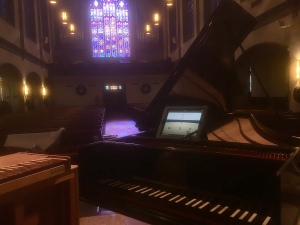 Looking down the nave from a seat in the orchestra ~ In the end I was given a small part to play in Sunday’s performance: Matt asked me to tune West End’s harpsichord for the event. I took this photo Friday morning when I had the sanctuary to myself for a few minutes.

On Sunday, West End’s performance presented Part 1 – the first 3 cantatas – of the Christmas Oratorio with an orchestra that included some of the finest musicians in Nashville: more than two-thirds of the orchestra were members of the Nashville Symphony, and West End Associate Minister of Music and Organist Andrew Risinger, who also also performed, is the symphony’s Organ Curator.

“Those players were there because they wanted to play that piece.” Matt told me. “They were calling Roger (Wiesmeyer, the Nashville Symphony’s English Horn player, who also helped organize the orchestra for this concert) to ask if they could get on the roster. And we benefitted very much from the players’ enthusiasm for playing Bach!”

All of the fine soloists were members of the church’s choirs:

It’s impressive when a church can field a full roster of excellent soloists for a Bach oratorio from the ranks of its own choirs, as West End did for this concert. Their performances were well-prepared, nuanced, and engaging. Kyle Collier, who sang the role of The Evangelist, made me sit up straight several times, and downright floored me with his performance of the aria Frohe Hirten, eilt, ach eilet (Happy Shepherds, Haste) in the second cantata.

“Alongside Ach, mein Sinn from the St. John Passion, it’s one of the two most difficult tenor arias in literature.” said Matt. A rollicking duet where the tenor goes up against the flute, each musician trying to outdo the other in their execution of fleet passagework, Kyle pulled off his his match with Nashville Symphony Principal Flute Erik Gratton admirably. 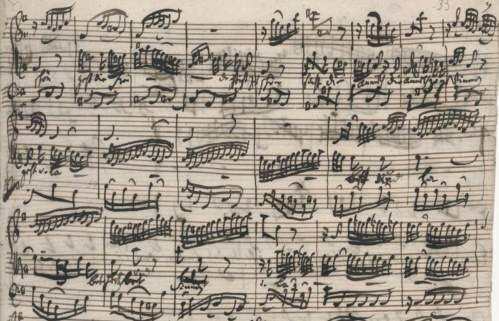 An excerpt from Sebastian’s manuscript of the aria “Frohe Hirten, eilt, ach eilet” from the Christmas Oratorio (described above). The top staff in each system is the flute solo, the second staff is the Tenor solo, and the third is the continuo. Look at all the black notes!

Michael Gebhart, who serves as Assistant Organist and Choirmaster at Christ Church Cathedral downtown, joined the orchestra on continuo like a boss, moving back and forth between positive organ and harpsichord fluidly in the manner of a prog rock keyboardist.

This was not the first concert like this I have attended at West End – the church’s combined choirs presented the Brahms Requiem in 2015, and last year the church presented a thorough choral and orchestral performance of music by Elgar, Poulenc, & Lauridsen which I also attended. At both of these concerts I sat with the congregation on the floor, and from that vantage, the orchestra at times obscured the choir in the musical texture when the orchestration was robust. On Sunday I decided to sit in the balcony. Sebastian wrote this music to be performed in a space much like West End, in fact – the churches of St. Nicholas and St. Thomas in Leipzig – and from that height and distance, I hoped, I might hear an acoustic image similar in balance and blend to the way the music was originally performed.

Sunday’s performance was in English, but from my seat in the balcony, the language didn’t matter much to me, as the distance from the singers in such a reverberant space made concerns about language choice or diction a moot point. I was there to hear the music – I didn’t need to understand the words: everyone knows the story. The balance between the soloists, choir, and orchestra was close to ideal. For nearly 90 minutes in muted light filtered through stained glass windows, I heard Sebastian’s marvelous and inspired music as close to the way he conceived it as I will hear it live all season, as I will have heard all year. It was glorious.

“It was a great experience to play the Christmas Oratorio, a beautiful piece that, unfortunately, is not well known here in the U.S.” said Christopher Farrell, Nashville Symphony musician and local composer, who played viola in the orchestra. “Like many of my symphony colleagues who were playing, this was my first time to play it and I was grateful for the opportunity. Also, as a professional it is really important and rewarding to play alongside members of the community who were performing the Oratorio for the love of music and spiritual experience of Bach’s work.” 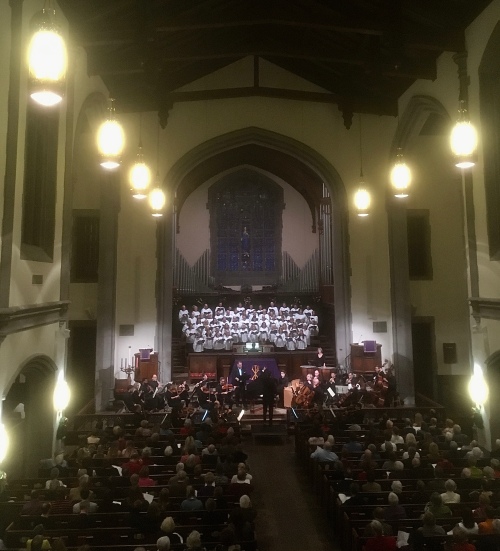