All concerts by the NPO are free and open to the public.

I’m excited about this next pair of concerts which embodies musical variety and highlights longstanding NPO relationships.  For over twenty years, I’ve personally known and revered the musicianship of Michael Samis, Denise Baker, and Jessica Blackwell, all of whom have Nashville Symphony ties and are featured on this program. They’re fun people, friends with one another, believe in the NPO mission, love our Orchestra members and our diverse audiences.  And they’re exquisite musicians who play passionately from the heart, so the audience (and I!) will assuredly swoon as they present the Brahms Double Concerto and the Vaughan Williams Serenade to Music. 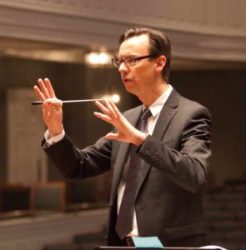 Jessica and Denise are concertmasters with NPO, and their annual concertos with the Orchestra have delighted myriad audiences for years—including those at our familiar December venues, First Apostolic and Casa de Dios. Michael’s first concerto with NPO was at our first appearance at the Casa several seasons ago, and his playing was so heartily received by the enthusiastic audience that there was a long line of folks after the concert eager to get a photo with him! 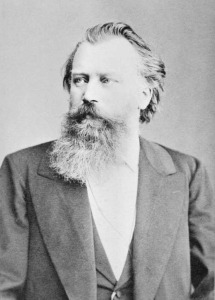 Compared to other pieces in the standard concerto literature, the Brahms Double is performed less often due to the requirement for not one but two musicians to play virtuosic solos, as well as to Brahms’ challenging writing for the orchestra. These concerts will be a rare opportunity to hear this marvel performed by stalwarts of the local classical music scene.

Brahms composed the Double Concerto in 1887. It is his final work for orchestra. The piece was at least in part a peace offering to his friend Joseph Joachim, from whom he had been estranged for several years following Joachim’s divorce from his wife Amalie, with whom Brahms had sided. Joachim was one of the most famous violinists of the 19th century. The other soloist for whom the concerto was conceived was the cellist Robert Hausmann, with whom Joachim played in the renowned Joachim Quartet from 1869 – 1907.

The concerto is in three movements and follows standard form for a Romantic concerto; although the structure of the first movement is unconventional, it describes sonata-allegro form in a “loose manner”. The second movement is lyrical and tender, and the closing third movement recalls Brahms’ “gypsy” style, reminiscent of the Zigeunerlieder Op. 103 & Op. 112, and his immensely popular Hungarian Dances.

The Joseph Joachim Quartet performing in the Sing-Akademie zu Berlin—an engraving based on a painting (currently lost) by Felix Possart, published as a Beilage to the Zeitschrift der Internationalen Musikgesellschaft 4/5 (1903). Despite the (incorrect) legend on the engraving, Joachim and Hausmann are both seated on the right.

Denise Baker began playing the violin at age 14. She earned bachelor’s and master’s degrees in music at the North Carolina School of the Arts, and joined the Nashville Symphony in 1996. She has also performed throughout the United States and Europe and participated in festivals such as the Chamber Music Festival of Saugutuck, Brevard Music Center and Great Music West.

Michael Samis performed the Dvořák Cello Concerto with the Cincinnati Symphony Orchestra at age 17, and graduated from the Cleveland Institute of Music in 1999 with the Ellis A. Feiman Award in Cello. He has performed as soloist and orchestral player throughout the U.S. and beyond, and was a member of the Nashville Symphony from 2000 – 2013. After leaving the Nashville Symphony, Michael has pursued a parallel career to his work as a musician in clinical social work, utilizing his skills as s cellist in psychotherapy to help people connect with their inner path toward healing. 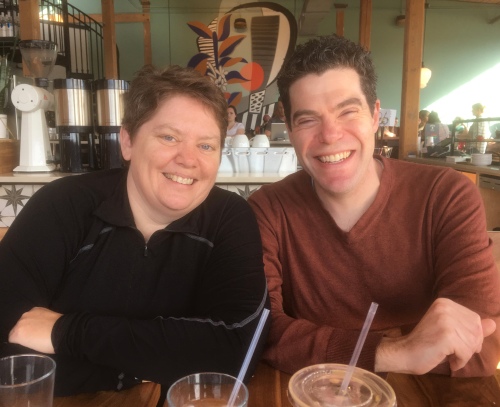 “Brahms is one of my favorite composers,” said Michael, “although one thing that’s difficult about Brahms is that his passion reaches beyond the resources he had – beyond the instruments he was writing for.”

Denise added “It doesn’t matter how much I’ve been playing, I always feel like I have to be in shape for Brahms. His music takes stamina!

“Our hope is that we can get through it without cracking up – we’re besties and have been for years! I don’t know if we’ll be able to look at each other.” Denise and Michael – and Jessica Blackwell too, who will be performing as concertmaster on this piece – played together in the Nashville Symphony for many years.

I asked them how the Double Concerto compared to other works by Brahms they have performed.

“The notes never do what I expect them to do.” said Michael. “It’s amazing! …although thematically, it doesn’t stand up up to some other works, like the Piano Trios. Sometimes it feels like what I am playing is an accompaniment to Denise’s part, like I’m ‘noodling around’ her.”

“But the overall product is amazing!” Denise said.

Ralph Vaughan Williams wrote his Serenade to Music in 1938. It was composed as a gift to the conductor Sir Henry Wood, on the occasion of the 50th anniversary of his first concert. Henry Wood was primarily known for and associated with the Proms – the U.K.’s most prominent classical music festival, at which he conducted from its inception in 1895 until his death in 1944. 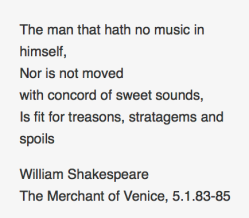 Off The Podium motto

Serenade to Music is a setting of the famous discussion of music in Act V, Scene 1 of William Shakespeare’s The Merchant of Venice. (Not incidentally) this text provided the motto for my website, and has been featured on the Home page of Off The Podium since I began publishing my writing about music and education here in March 2015.

The Serenade was originally composed for 16 solo voices and orchestra, and later adapted by Vaughan Williams into variations on this ensemble, including the arrangement that the NPO will perform on their upcoming concerts.

Sir Henry conducted the first performance at the Royal Albert Hall in London on October 5, 1938 – his Jubilee Concert. Sergei Rachmaninoff, who had performed on the first half of the concert, stood in the wings during the premiere and wept at the beauty of it. 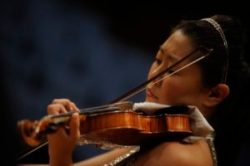 Jessica Blackwell received her Bachelor of Music in Performance in 2006 at Rice University, and a Master’s degree in Performance/Pedagogy in 2008 and a Graduate Performance Diploma in 2009 at The Peabody Conservatory of The Johns Hopkins University. She played with several orchestras around the country before joining the Nashville Symphony in 2009. She also serves as a co-concertmaster for the Gateway Chamber Orchestra as well as for the NPO, and is a frequent guest performer with ALIAS Chamber Ensemble.

I think this piece is stunning. Vaughn Williams adds a choir and solo voices to the orchestra, which gives the piece breadth,  but the piece also feels intimate. I think a lot of Vaughn Williams’ music has an open, soaring feeling, and this selection is no different. I have loved learning the violin solos in this piece- my goal is to imitate the human voice as much as i can with the sound i choose to play with. I have also enjoyed figuring out how my solo line fits in with everything else but also at moments soars out of the texture as well. I have no doubt this piece will captivate the listener in a very memorable way.

“The NPO is sounding better than ever this season in part thanks to the regular coaching the Symphony provides.” said Christopher Norton. “Just a couple of weeks ago (Nashville Symphony musicians) James Zimmerman, Pat Kunkee, Chris Farrell, Keith Nicolas, Glenn Wanner, Jessica Blackwell, and Denise Baker did sectionals with our musicians, and after break when we reassembled as a full orchestra, the level of playing was remarkably heightened!  We’re grateful for this ongoing relationship.”

“I love the NPO! They’re awesome!” said Michael and Denise, together and almost at once. Denise concluded “It’s amazing how much progress they make from the first rehearsal to the concert. They sound so good!”