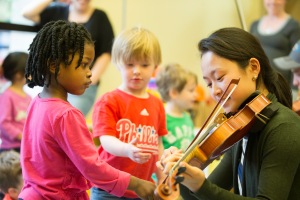 Violinist Kaili Wang is known to the Nashville classical music community as the only two-time winner of the Nashville Symphony’s Curb Concerto Competition (2015 & 2017). The 17-year old Harpeth Hall rising senior is also a long-time student in the Pre-College program at Vanderbilt University’s Blair School of Music, where she studies with Professor of Violin Carolyn Huebl and is concertmaster of Curb Youth Symphony.

What you may not know about Kaili is that in addition to bringing performances of virtuosic violin literature to stages in Music City and beyond, she has spearheaded an effort to bring live music to very young children in our community, inspired by her experience playing violin for villagers in Uganda earlier this year.

Kaili Wang performs the first movement of the Sibelius Violin Concerto with Giancarlo Guerrero and the Nashville Symphony, May 17, 2017

Last week I spoke with Kaili about her experience in Uganda, and how it inspired her to start the new Poco a poco pre-school outreach program at Blair School of Music.

“When I was in 10th grade I taught a basic musicianship class at W.O. Smith Community Music School as a volunteer.” said Kaili. “My older brother had taught piano lessons there when he was in high school. High school students from Blair often teach the basic musicianship class and college students more often teach private lessons. That was my first experience bringing music to young children, but after that I didn’t do anything like this until I went to Uganda.”

In January, 2017, Kaili traveled to Jinja, Uganda with 11 other Harpeth Hall students as part of the school’s annual Winterim program. According to the school’s website, “Winterim is a Harpeth Hall signature program in our (school) that launched in 1973. This three-week program in January offers upper school students the very best in experiential learning, creating for them a chance to see their academic studies take a tangible, dynamic form.”

“I always wanted to go to Africa!” Kaili told me. “I thought Winterim would be good opportunity to have this experience. I also felt I had something unique and special to contribute: my music, my violin.” 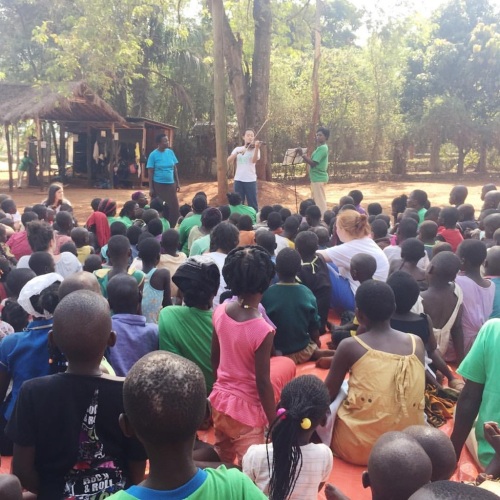 “It was more like a service trip than a tour.” said Kaili. “We spent a week on safari, and then we spent 10 days at Heal Ministries mission sites in Uganda, at James Place and other orphanages and nonprofits. Heal Ministries is a Christian nonprofit in Nashville that started this project to help women who have been abandoned or are having other difficulties. They learn craft and artisan skills in order to create products to sell online and at trunk shows in Nashville as well as in Uganda.”

While she was in Jinja, Kaili had many opportunities to play her violin.

“I practiced almost every day and the neighborhood children would listen to me play. I played at pre-school and at “sewing graduation”. (After women in the program complete their sewing course, they receive a sewing machine.)” she said.

“In adddition to Heal Ministries, we also visited many similar ministries such as Ekisa, where I played for disabled children.”

Tuesday, January 10th- 9:46pm
Today we went to Amani Baby Cottage, primarily an orphanage for children up to 6 years old. We toured the orphanage–the facilities are very nice quality! We held babies less than a year old, and then I played my violin for the kids–Brahms’ lullaby, Gluck: Melodie, Gesu Bambino, the first movement of the Seitz Concerto No.2… Mama Susan really appreciated it and gave me a huge hug afterwards! Lynley later told me that a 8-10 year old girl who was physically disabled was laughing through the entire performance, because when she had been abused as a young child, her only consolation and source of happiness was music… this was one of my favorite post-performance comments, ever.
Wednesday, January 11th- 8:25 pm
When we got back from town, I practiced violin under the thatch roof. Halfway through my practicing, a girl called Ashley ran up to me and wanted to hear me play the violin, so I played Mary Had a Little Lamb, Happy Birthday, Twinkle Twinkle, Jingle Bells – she loved it! Her mom, Diana also came over and was very grateful for my playing: she gave me a huge hug. I also had an audience for the longest time: 5 kids from the neighboring house were standing by the fence watching. Also I made friends with a goat! It nuzzled me while I was practicing…
Friday, January 13th- 11:09pm
…at their bible study, I played the violin. Everyone was there: staff, women, employees, children, and even people from outside the James Place community. I first explained what a violin is, and Parvin translated for me into Lugandan. I then played Praeludium and Allegro by Kreisler, and immediately when I started, the women broke into laughter like it was hilarious! I was a bit freaked out… but they were just so surprised by the new sound, and clearly happy. I then played Gluck: Melodie, then Liebeslied.
~ excerpts from Kaili’s Uganda journal

Kaili recounted these experiences and many others like them to me, and it is clear that they made a deep impression on her. “I would’ve never thought I’d be laughed at during a performance after playing violin for this long! ” she said.  “But it was probably the most precious moment. They had never seen or heard a violin – everyone kept calling it a guitar.”

“I was one of the only people accepted by the goats at James Place and had a great time with them as well.” said Kaili. 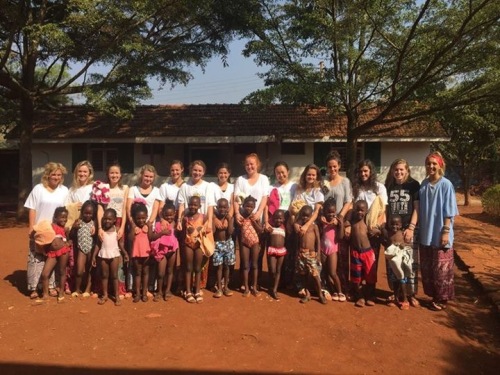 When Kaili returned to Nashville from Uganda, she was inspired by her experiences there – especially her experiences playing music to children who were encountering live performance for the first time.

“I’m President of MJB Scholars Student Council at Blair Pre-College.” she said. Myra Jackson Blair Scholars are a group of students who have been awarded merit-based scholarships by Blair School of Music. These awards are gifted annually to outstanding young musicians who have been recommended by their teachers and who aspire to careers in music. “I wanted to make service a component of the program – we had already done a collaboration with W.O. Smith in the fall of 2016, but it was a single event.”

“So in March I started an outreach program – to young children. I ran it by Mrs. Schneller and she reached out to the director of the Vanderbilt pre-school program.” (Pam Schneller is Associate Dean of Precollege and Adult Programs and  Senior Lecturer in Choral Music at Blair School of Music.)

“A group of MJB students visited 6 different pre-schools between March and June, with a program divided between playing our instruments for the children, and giving them each the opportunity to make sounds on our instruments themselves.”

These extraordinary teens love to share the thrill of making music, and Kaili organized these events superbly. When a two-year-old pulls the bow across the string, the eyes of the sixteen-year-old light up just as much as the toddler’s. Teenagers have so much to offer; they hunger to share and be needed.  The energy they receive from the toddlers is almost palpable and the community the teens forge through these experiences makes the world a better place.  I’m enormously proud of them. 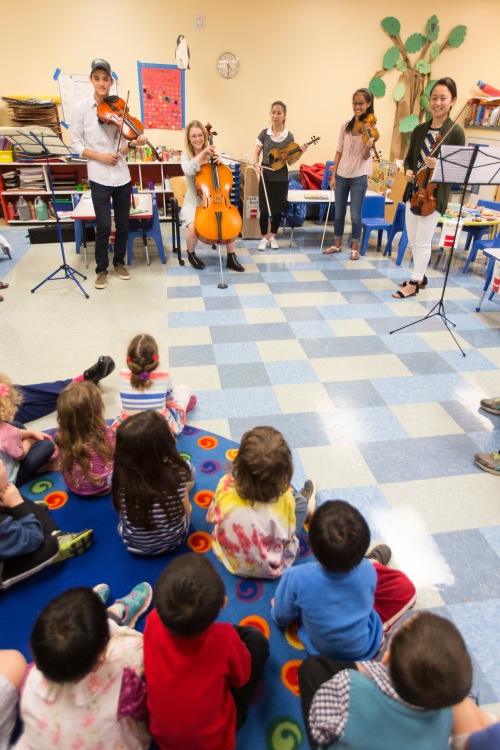 “Mrs. Schneller, the other officers and I agreed to call the pre-school outreach program Poco a poco,” said Kaili.  (Poco a poco means “little by little”, and is an Italian term commonly used in music notation.) We also choose the motto ‘sharing the joy of music one child at a time’. “
So far this year Kaili has been joined by 8 of her classmates in these outreach events:

Plans are already underway for the program to continue in the fall. 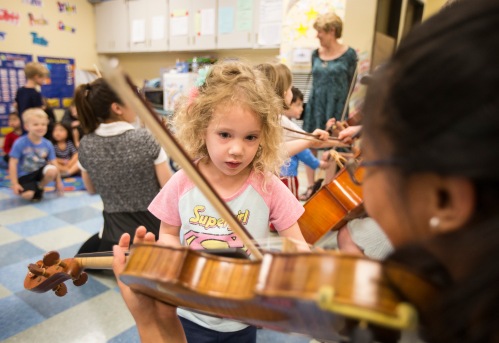 Music is, in essence, supposed to be a simple and pure form of art and entertainment. Seeing the interaction between children and music is important to me because it helps me to let go of the expectations I’m held to as an aspiring professional and make music more for its own sake.

I was touched as this story unfolded for me through several conversations over the past months and I put it all together – how Kaili’s trip to a far-away land and a different culture inspired her to find a way to bring something special to children in her own community. Kaili is a remarkably accomplished young musician – which she has already demonstrated with grace and passion to all of who have come to know her over the last few years. What I found so moving and remarkable was to learn of her strong compassion and leadership qualities as well, and her drive to make a difference in the lives of others. 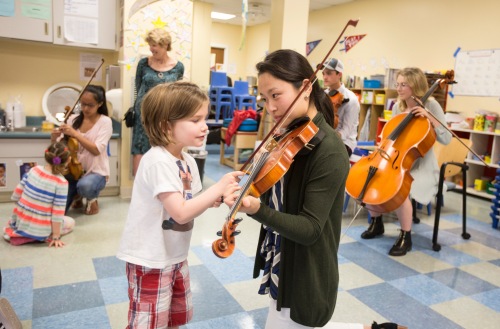 Leave a Reply to 2017: What Kind of Blog Is This? « Walter Bitner Cancel reply