The big news for Education & Community Engagement at the Nashville Symphony this season is the launch of our groundbreaking Accelerando program. I’ve written pretty regularly throughout the last year about Accelerando here on Off The Podium: from our very first press conference announcing the program in September 2015 to the announcement of our Inaugural Class of six students in August 2016. Click here to access all of these articles detailing the program and its impact on the community.

Accelerando has been garnering both local and national attention. Nashville Public Television featured the program as an ArtsBreak segment earlier this fall (above), and I have spoken about it at many public gatherings here in Nashville, as well as at the League of American Orchestras national conference this past June in Baltimore. I am looking forward to returning to the annual SphinxConnect conference in Detroit in February 2017, this time to speak about Accelerando on a panel addressing issues of strengthening the pipeline and points of entry for classical music students from diverse ethnic communities.

Applications to audition for the 2017 class of Accelerando are now live on the Nashville Symphony website here. They will be held on March 4 & 11, 2017.

Is It A Fiddle Or A Violin?

This year we welcome a new musician to this delightful program: Lauren Saks joins David Coe – who was a founder of Is It A Fiddle Or A Violin? in 2006 – in bringing this rich program to hundreds of elementary school students every year and features tours of both Schermerhorn Symphony Center and the Country Music Hall of Fame and Museum. Is It A Fiddle Or A Violin? is scheduled a dozen times this year -we have already hosted the program four times this fall, with another eight mornings planned between now and May 2017.

On Saturday, October 22, approximately 6,700 people attended our annual Free Day of Music – this is the Nashville Symphony’s biggest community engagement event of the year! Performances showcasing more than 20 different musical acts were held on four stages located both inside and outside Schermerhorn Symphony Center, and a diverse array of performers from throughout the community presented a wide range of musical styles including baroque, classical, contemporary classical, jazz, rock, pop, soul, traditional music from Appalachia, Africa and China, and much more.

This fall the orchestra presented our first Young People’s Concerts of the season: free concerts for thousands of students, many of whom were attending a performance at Schermerhorn Symphony Center for the first time. Middle school students filled the hall for American Originals – a program of music exclusively by American composers – on October 12 & 21. In addition, the Nashville Symphony traveled to local schools to present this program at Croft Design Middle Prep in Nashville on October 14, and at Bradley Academy in Murfreesboro on October 19.

This fall the Nashville Symphony presented two masterclasses for local students with guest artists visiting Nashville to perform with the symphony on our Aegis Sciences Classical Series programs.

On October 27, violinist Simone Porter (in town to play the Barber Violin Concerto with the symphony) taught a masterclass for pre-college violinists in Laura Turner Hall at Schermerhorn Symphony Center. This wonderful event was extremely well-attended – the entire Metro Nashville Public Schools High School Honor Orchestra was present, as well as many local violin teachers and their students. Three accomplished local high school students were selected to perform in this masterclass through an online video competition.

Pianist Boris Giltburg – who was in town to perform on our Rachmaninoff’s Rhapsody program – taught a masterclass for piano students from Belmont University Music School and Blair School of Music on November 14. The masterclass was held in Turner Hall at Blair to a rapt audience of local college piano students and faculty.

Nashville Symphony Musicians in the Community

Our sectionals program – in which Nashville Symphony musicians lead rehearsals for students in Middle Tennessee school orchestra and band and youth orchestra programs – is a vital component of our student engagement  activities. This fall our musicians led sectional rehearsals at:

Chamber ensembles comprised of Nashville Symphony musicians presented school performances for nearly 700 students this fall, with more scheduled in the new year. Schools and after-school programs visited by our musicians for these performances include:

Our instrument petting zoos are a hands-on way to introduce young children to the instruments of the orchestra, and our department coordinates these events, which are largely presented by our amazing Nashville Symphony volunteers.  Instrument petting zoos are held regularly throughout the community all through the year: at schools and after school programs, community concerts, and every Pied Piper concert of the season. This fall instrument petting zoos were held at Live on the Green music festival, the Tennessee Craft Fair, Fannie Battle Day Home, and the Inglewood and Bellevue branches of the Nashville Public Library – and here at Schermerhorn for our Peter & the Wolf and Holiday Spectacular Ann & Monroe Carell Family Trust Pied Piper Series concerts. 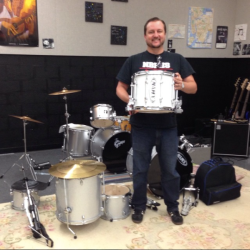 from my instagram feed: Nashville Big Picture High School teacher Graham Mote receives a drum set from the symphony on behalf of the school’s after school band program

The Education & Community Engagement Department coordinates reservations for our Curb Open Dress Rehearsals, which are attended by thousands of students in grades 5-12, college and graduate students, and seniors (through our Lifelong Listeners program) every year. This fall’s programs featured Mozart & Tchaikovsky on November 4 and Rachmaninoff’s Rhapsody & Piano Concerto No. 4 on November 17. Our department will host four more Open Dress Rehearsals in February, March, and April.

from my instagram feed: past winners of the Curb Concerto Competition rehearse with conductor Jeff Tyzik and the Nashville Symphony: Jocelyn Hartley, cello (2016) and Kaili Wang, violin (2015), December 1, 2016

Our department also plans and executes programming including the preconcert activities and – in collaboration with Nashville Symphony Associate Conductor Vinay Parameswaran – repertoire and scripts for our Pied Piper concerts for children and families. This fall’s Pied Piper performance on October 1 presented two perennial classics for young people: Benjamin Britten’s A Young Person’s Guide to the Orchestra, and Prokofiev’s Peter and the Wolf featuring mesmerizing puppetry from Nashville Public Library’s Wishing Chair Productions. Our Holiday Spectacular & Sing-Along on December 3 was led by guest conductor Jeff Tyzik and included an hour of holiday favorites such as Sleigh Ride, ‘Twas the Night Before Christmas, and a superlative duet performance by past winners of the Nashville Symphony’s annual student Curb Concerto Competition accompanied by the orchestra.

As is clear for all to see, the Nashville Symphony’s education and community engagement programming reaches thousands of people from all walks of life throughout Middle Tennessee every year!

To put the numbers in a nutshell, Associate Conductor Vinay Parameswaran leads us through a “scientific” evaluation of the statistics: