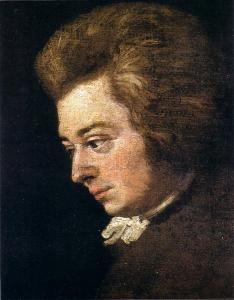 detail from a portrait of Wolfgang Amadeus Mozart, painted in 1782 by his brother in law Joseph Lange. Mozart wrote the C minor piano concerto in the winter of 1785-86

This month Roger Wiesmeyer and an ensemble of local musicians – many of them members of the Nashville Symphony – will perform two benefit concerts for a local charity featuring music by Wolfgang Amadeus Mozart, as Roger has done every year at this time since 2003.

This year’s concerts will take place:

This year’s concert features the C minor piano concerto, K. 491 conducted by Vinay Parameswaran with Roger as piano soloist. Admission is $10, and all proceeds benefit The Contributor.

I’ve already written about this program here on Off the Podium: Roger performed the C minor piano concerto back in November here at Schermerhorn as part of the Nashville Symphony’s OnStage series of free chamber music concerts, and also at W.O. Smith Music School in our OffStage series (also of free chamber music concerts!). In those performances I accompanied Roger on second piano playing a reduction of the orchestra part on the first and third movements, and a trio of Nashville Symphony musicians performed the second movement with Roger in an arrangement by Mozart’s younger contemporary Johann Nepomunk Hummel. The November performances were a sort of “warm-up” or “test-run” of the concerto for Roger – he will be performing it this month with full orchestra.

Roger is going to perform the C minor piano concerto twice on each concert. I asked him if this wasn’t pretty unusual for a classical music concert.

“Yes! It is. You know, Leopold Stokowski did that. He was the music director of the Philadelphia Orchestra from 1915-1940 and, especially if he would program a contemporary piece that people really hated, he would just turn around and do it again!

“Fortunately, I don’t think anyone is really going to hate this piece. But there’s a lot to take in, and a lot to give out, in my case. So I’m looking forward to getting to play it twice in one go.

Everyone performing in this concert – Roger and all of the musicians in the orchestra – donate their services.

“Everybody plays for free.” said Roger. “And I’m very excited this year: the Associate Conductor of the Nashville Symphony, Vinay Parameswaran, is going to be conducting.”

This year’s “Mozart Bash” concerts will benefit local street newspaper The Contributor, which has the highest circulation of any street newspaper of its kind on North America at more than 100,000 copies per month.

“What The Contributor does, is what I try to do with my Mozart concert.” said Roger. “To share Mozart with people that might not like Mozart – it might not be on their radar – but they want to support The Contributor, or they go to the church that I’m playing at, or they heard about it on the radio and they want to come for the cake. There are many ways to get people in the door and then they can discover what I discovered in my twenties: that Mozart is just about the most beautiful thing ever.”

By walterbitner in Chamber Music, Community, Mozart in Nashville & Concerto Orchestra, Music on January 13, 2016.
← Mellon Foundation Awards $959,000 to Accelerando Is Music a Commodity? →