Go to Part 1: The Joy of Solfège

Go to Part 2: The Legacy of Guido d’Arezzo

This is a simple but somewhat thorough description of the syllables for movable do solfège with la-based minor and how I applied them in my work as a teacher.  I do not claim this method as an example of haute Kodály, Gordon, or any other technique – for me solfège was always a means to an end, not an end in itself.  We used it for exercises to develop skills, and to learn notes accurately – and when these goals were achieved we left it behind.

Mostly I learned solfège on my own, initially as I described in Part 1 of this series of articles.  However I am indebted to Micheal Houlahan and Philip Tacka, with whom I took a two-week course based on their remarkable method From Sound to Symbol about five or six years ago.  This meticulously defined method for teaching students to write music notation is based on audiation, uses movable do with la-based minor, and Takadimi rhythm solfège.  I used this method with great success in my high school AP® Music Theory classes to jump start students learning to take melodic dictation for the first time, and I benefitted from their vast experience and insight in many other ways when I went back to the classroom after taking their workshop.

I also must thank my friend and mentor Michael Graham, who initially taught the method I describe here to the choirs of Nashville School of the Arts for many years before me.

Any mistakes, inefficiencies, or things you don’t like here are entirely my own, however.

Solfège as a music literacy component in elementary school

In comprehensive music programs I taught at elementary schools in New York and Nashville, I used solfège beginning in Kindergarten, along with Curwen Hand Signs, almost invariably when teaching new songs.  In these programs I taught songs to elementary schoolers by rote (introducing singing from written notation in middle school), but by incorporating both the syllables and the hand signs into the process, students learned a rudimentary “nomenclature and gesture notation” almost effortlessly.  When the time came to begin reading traditional notation, it was a small step for the students who already had several years of experience with solfège syllables and hand signs.

The music literacy program I developed and taught broke out musicianship skill development into components that were introduced separately, then combined as students matured:

Typically, in elementary school I taught every song first on solfège syllables and only moved to words when pitches, rhythms, and intonation were mastered.  As a rule, this usually didn’t take very long!  Elementary school students, once saturated in this method, assimilate new material very quickly.

The ability (time in the school schedule) to bring all of this curriculum to my students was a luxury afforded only at schools with a strong commitment to their music education program – in these cases I saw my students four or five times a week.  In these schools, the result I observed was that close to 100% of the students who went through the program learned to sing with excellent intonation and to play the recorder at a level of proficiency far beyond what is typically expected of elementary school students, from written notation.  In schools where I was not allotted as much time with the students, I taught a reduced version of the program outlined above, with less dramatic results.

In the K-8 schools I taught at, by the time students who went through this program reached middle school they could already read music, play an instrument, knew hundreds of folksongs and canons, were fluent in solfège, and already had several years of choral training under their belts.  At this point, the adjustment to singing from written notation in choir from singing without written music was minimal.  Solfège was the key to this entire approach to developing music literacy, in my opinion – it gave us a common language to talk about and understand what we were singing and playing as well as a ramp up into traditional notation.

This is the method I used when I directed the high school choral program at Nashville School of the Arts.  It is largely a method I inherited from the previous director Michael Graham.  Using this method all my choirs sang with flawless intonation and clarity, and the most dedicated students learned to perform choral music from written notation on (at least) an undergraduate level by their third or fourth year in the program.  During my tenure there we performed seven movements from the Mozart Requiem, the entire Fauré Requiem, and the entire Cantata BWV 106 (all with orchestra), an entire Palestrina Mass, Brahms Liebeslieder, Op. 52 (complete) and many motets, part-songs, and other accompanied and unaccompanied works spanning the 13th century to the present, all in their original languages. Most of the students in my program had no previous experience singing in a traditional choir or from written notation.  I credit the daily, focused application of the solfège method outlined here with enabling us to be able to not only approach but execute with excellence such repertoire with previously inexperienced singers in such a relatively short period of time.

At the beginning of every school year I would present the detailed PowerPoint I described in Part 1, and from which this series of articles draws its inspiration and outline.  This presentation included all of the syllables for all of the scales we would sing in class – outlined below – and with which we would mark all of our music throughout the year.  Much of what follows are slides taken directly from this presentation.

Students in the program were required to memorize solfège syllables for the following scales:

All students were required to be able to both write and sing these scales accurately.

The Major scale is identical to Ionian mode.

The natural minor scale is identical to Aeolian mode.

Si is the most common accidental in minor keys. 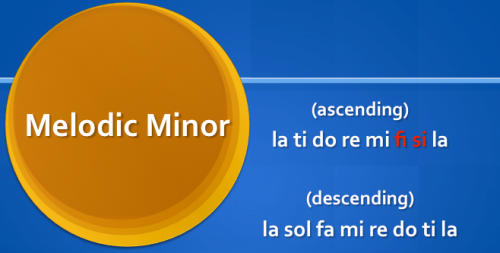 The descending melodic minor scale is identical to natural minor.

In addition, students in the advanced choirs (both which primarily sang early music) were required to be able to sing the modes on solfège syllables. 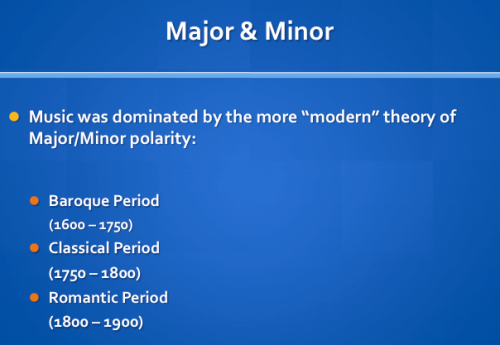 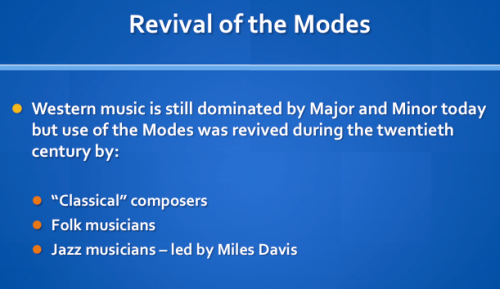 Ionian Mode is identical to the Major scale.  It is sometimes called a “major mode” because of the major third between the first and third scale degrees.

Dorian Mode is sometimes called a “minor mode” because of the minor third between the first and third scale degrees.

Phrygian Mode’s distinctive feature is a half-step between the first and second degrees of the scale.

Aeolian Mode is identical to the natural minor scale. 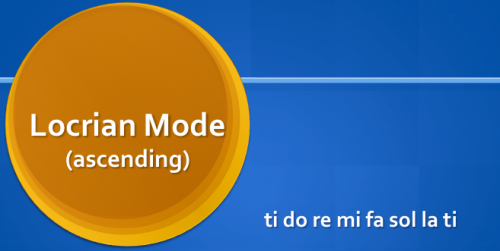 Locrian Mode was not used during the historical period but was adopted and is used by jazz musicians today.  We did not sing Locrian Mode in class but advanced students were required to know it and be able to identify it.

Typically, at the end of this presentation I would distribute two pieces to my beginning/intermediate choirs and we would mark them together in class, with students experienced in the method helping those who were brand new.  These two pieces were How Great Is The Pleasure which I included in Part 1 of this series, and Personent Hodie (below): 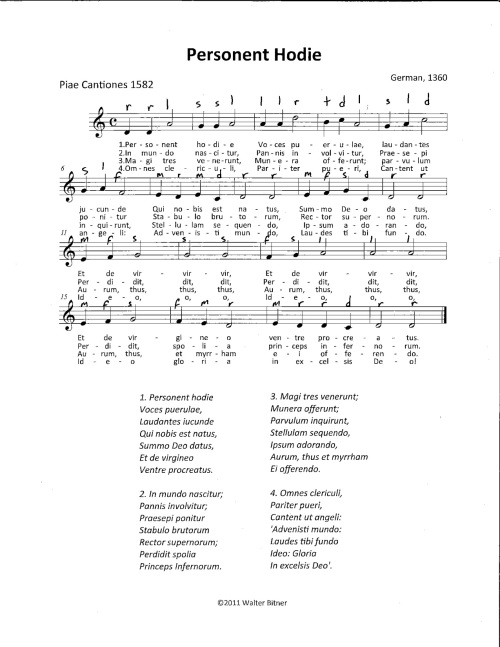 In my choir rehearsals at the beginning of each year, we sang all of the scales (and for advanced choirs, the scales and modes) detailed above at the beginning of every rehearsal as part of our warm-up, using D as the tonic.  We sang every scale (and mode for advanced choirs) both ascending and descending.  We did this every rehearsal until the choir could sing through all of them one after another with perfect intonation (usually within a couple weeks), and then for the remainder of the year I began the first rehearsal each week by running through them.

After working through the process of marking music with solfège syllables for the two pieces described above, for the rest of the year students would usually receive music to be marked at least one rehearsal before we would sing it in class, and were expected to bring it to the next rehearsal marked.

I had originally intended this series to consist of three parts, but the process of writing it brought up some anecdotes which I will share in Part 4.

Go to Part 4: Solfège With Amadeus

By walterbitner in Choral, Education, Music Education, Pedagogy, Solfège on September 1, 2015.
← Alive Inside Solfège With Amadeus →

Leave a Reply to 2017: What Kind of Blog Is This? « Walter Bitner Cancel reply