We spent an eventful four days attending concerts, interviews, panel discussions, and presentations, several networking (and celebratory) receptions, and other meetings. Some 500 people were there from all over the country (and some from other countries as well), many of whom only see each other a few times per year. The entire conference was imbued with a heady excitement.

This was my second Sphinx conference – to read some background about the organization and my visit to  SphinxCon 2016 click here. The activities packed into the event’s four days were considerable and expanded from previous years, in celebration of the organization’s anniversaries and with a design towards providing more resources and discussion to appeal to a greater number of people from the many constituents involved in the dialogue and activism for greater equity, inclusion, and diversity in the arts. Last year only one session occurred at a time. This year, often two or three sessions occurred during the same periods on the schedule, and those attending were forced to choose between sessions. On one occasion when two sessions I wanted to attend were scheduled at the same time and I tried to attend the beginning of one and the end of the other, when I arrived at the second session halfway through the period I wasn’t allowed to enter the room. It was so full it had exceeded the capacity set by the fire marshal!

As in previous years, activities were held at other the Westin Book Cadillac (a glamorous, historic hotel) and Orchestra Hall (home of the Detroit Symphony), which are both located in downtown Detroit, about a mile apart. We took several Uber rides between them, as we attended events at the hall on three of the four days of the conference. Nashville Symphony EDCE staff Kelley Bell (Program Manager), Kristen Freeman (Department Coordinator) and Kimberly McLemore (Accelerando Manager) and I divvied up the schedule between ourselves to gather as many impressions as possible, and met each night for dinner at some of Detroit’s unique restaurants to debrief and decompress.

This year I represented the Nashville Symphony on a panel session titled Building the Pipeline, on Saturday, February 11. This 50 minute discussion about examples of programs devoted to increasing opportunities for musicians from under-represented communities pursuing careers in classical music was hosted by Lee Koonce, President & Artistic Director of Gateways Music Festival (Rochester, NY) and included Sarah Johnson, Director of Weill Music Institute at Carnegie Hall (NYC) and John Kieser, Executive Vice President & Provost, New World Symphony (Miami, FL). Distinguished company indeed! Building the Pipeline was broadcast (as was the entire conference) by Detroit Public Television and you may watch the video recording here:

I spoke about the Nashville Symphony’s award-winning Accelerando Program, of course. The portion of the video in which I discuss Accelerando is from approximately 7:00 – 15:30.

We attended two concerts, both final round competition performances with full orchestra in front of a live audience at Orchestra Hall: the Junior Division (ages 17 and under) Honors Concert on Friday, and the Senior Division (ages 18 – 30) Finals on Sunday afternoon, which closed the proceedings of the conference and competition. The winner of this year’s Senior Division competition – and a $50,000 purse – was a finalist from previous Sphinx competitions: 21 year old Annelle Gregory, who performed with the Nashville Symphony earlier in 2017 on our annual Let Freedom Sing concert.

SphinxConnect is – as the name implies – a unique and exciting opportunity to network and build relationships with peers from across the country who are engaged in promoting the shared mission of increasing opportunities for greater equity, inclusion, and diversity in the arts, specifically but not limited to classical music. Much of our time there was spent in conversation with old and new friends from around the US and beyond, building bridges, sharing experiences and ideas, business cards, taking selfies together…

Nashville Symphony EDCE staff spent time with friends and former students from the Atlanta Symphony’s Talent Development Program (TDP), whose ground-breaking program has served as a model and “sister program” – so incredibly helpful as we develop and grow Accelerando. We also met with EDCE staff from other symphony orchestras and many of the musicians who gather in Detroit for this event once a year to rehearse and perform together in the concerts, showcase, or qualifying auditions, to talk, eat, and drink together, to share stories and inspiration and renewal.

Atlanta Symphony TDP alumni gather for a photo at SphinxConnect 2017

As at the end of last year’s conference, Sphinx’s President & Artistic Director Afa Dworkin stood before the conference on Saturday night and exhorted those assembled in the Book Cadillac’s spacious Woodward Ballroom to share just how they would take what they learned, how they were inspired from this year’s conference back to their own communities and create change.

As I listened to the optimistic and excited plans and dreams described by those parading to the microphones that night, it was clear to me that my own path has been laid before me – and before all of us here at the Nashville Symphony – as we nourish the garden we have planted here in Music City. Our initiative in starting Accelerando has led to others around the country looking to us for leadership and inspiration as they seek to create similar or allied programs in their own communities. The implications for our organization, our city, and the far-flung American orchestra industry are clear: it’s vital that we succeed.

It was with a feeling of satisfaction that I returned home to continue our work to bring music and music education opportunities to all in our community, and with a renewed sense of the importance of this work, in this time and place. 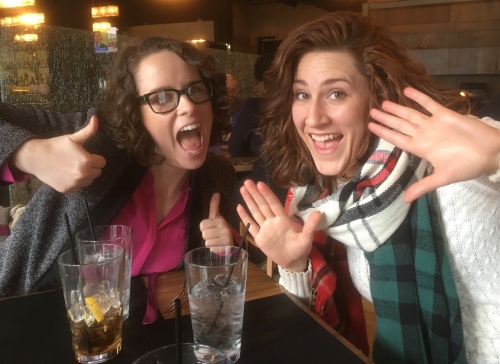