At the end of the second hour I hurried over to Collins for the first presenters recital – in which I was scheduled to perform on recorder.  As participants were finding their seats and preparing for the recital to begin I found Eva Lymenstull and spoke with her about joining Nicolas to play continuo for my piece.  She looked over the music and agreed, and after a strong performance of a piece by Marin Marais from Allison Edberg Nyquist (violin), Joshua Keller (gamba), and Polly Brecht (harpsichord), and another performance I missed because I stepped out of the auditorium, it was my turn.

This was one of the highlights of the festival for me.  Although I still perform on recorder a few times each year, I haven’t performed with a full continuo complement – as here with cello and harpsichord – in many years, although there was a period of my life when I did this all the time and took it very seriously.  Usually if I am the soloist I will just have keyboard accompaniment or otherwise I am part of an ensemble.  On top of this, Nicolas and I had only quickly played through each movement once the previous day (without all the repeats) to set tempi, and Eva had never played it with us – I think she was sight-reading it for the first time actually.  So there was a heightened level of intensity and slight sense of danger to this performance, at least for me.

We played Händel’s Sonata in F Major for recorder and continuo, which all recorder players will know – it’s one of the most popular pieces in our (small) repertoire.  And it was so fun.  Both Nicolas and Eva played with sensitivity and grace, Nicolas often imitating my (improvised) ornaments in his accompaniment and Eva playing with warmth and anchoring the ensemble with a remarkably deft hand considering I had just handed her the music a few minutes beforehand.  We blew through all four movements and it seemed like it was over so very quickly.

After I finished with the Händel Joshua Keller and Cynthia Black joined Eva on stage for a lovely and unusual trio piece – violin, cello, and gamba – by a little known contemporary of Haydn (was it Josef Anton Liber?  I can’t remember now).  And then it was time for lunch.

I only had an hour before I had to be back but ran out with the members of ARS to California Pizza Kitchen. Over salads and pizza I learned that all five members of this remarkable young ensemble are doctoral students in the historical performance program at  Case Western Reserve University in Cleveland. We chatted about life in the early music world and life in Nashville and I enjoyed hearing their stories from studies abroad and being “in the thick of it”.  Unfortunately I had to bolt my salad and hurry back to Lipscomb as I was scheduled to present at 1 pm.

I met up with Jessica Dunnavant and the two of us basically embarked on a conversation about baroque flute and recorder, sharing anecdotes about the instruments, their construction, repertoire, and performance practice for a small but engaged group of participants. In masterclass style, one of Jessica’s graduate students from Middle Tennessee State University performed a slow movement from a baroque flute sonata and I made some suggestions about how she might approach moving beyond the written notes to add ornamentation in baroque style as Telemann indicated in his Sonate Metodiche.  Yet again, the hour was quickly over.

At this point I was not scheduled again until the evening concert, and I went home for a few hours to rest and attend to some other things as NEMF fell in between two very busy weeks (I had a rehearsal for something completely different the next day and then an important press conference at the hall on Monday) so I missed another hour of presentations and the second presenters recital.  In addition to the sessions I attended, NEMF offered classes on harpsichord topics. viola da gamba and baroque cello, lute basics, a second session on renaissance and baroque winds, baroque violin, figured bass, a second participants chorus session, and an afternoon recital featuring all the presenters who did not perform in the morning. 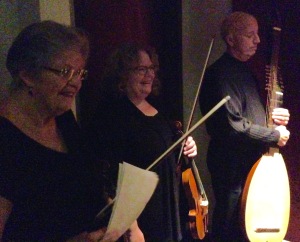 I arrived an hour before the evening concert.  After tuning my lute and warming up, I spent most of the time backstage greeting friends and acquaintances and as they arrived and like me, waited for their turn on stage.  The closing concert of the festival featured a number of ensembles and performances in two acts, in gala style befitting the end of a festival.  Although the attendance that I witnessed for the festival overall was small, it was greater than I had expected and led to intimate and enthusiastic groups at each session.  The closing concert, however, was well attended – one of the largest audiences I have seen for an early music performance in Nashville.

After trio sonatas by Vivaldi and Locatelli, I joined Terri, Joshua, and the other lutenists on stage and we began our set.  Terri sang so beautifully and expressively and after all the rehearsals everything came off without a hitch – it was particularly gratifying to hear Francis say as we went off stage for intermission: “well, I think we did what we wanted to do!” which I interpreted as not only pulling off a solid ensemble performance but also demonstrating that satisfying continuo can be provided by string instruments alone (sans harpsichord), which in fact was common enough during the early baroque, and into the 18th century in Italy especially.

After intermission the orchestra took the stage and performed the Concerto for Strings in C Major RV 114 by Vivaldi under the lead of Music City Baroque’s new Artistic Director Allison Nyquist, followed by a performance of Vivaldi’s famous Gloria RV 589 with a small choir (9 singers) joining the orchestra under the direction of Tucker Biddlecombe, Director of Choral Activities at Vanderbilt’s Blair School of Music.

The orchestra consisted of all the strings players featured in the festival throughout the day (including the players from ARS) as well as several others who joined just for the evening concert augmented by Jessica (baroque flute), Jared Hauser (baroque oboe), and Shelby Lewis (natural trumpet), with Francis (theorbo) and Polly (harpsichord) holding down the continuo.  The balance between the choir and orchestra was in fact remarkable. Margaret, Terri, Mareike, and Megan Farmer fulfilled the soloists roles in addition to singing on the choruses with the rest of the choir, and the entire piece sparkled with vitality, bringing the audience to our feet for a rousing and enthusiastic conclusion to Nashville’s first Early Music Festival.

We gathered at the final reception to say goodbyes, exchange business cards or contact information, take photos…many would be leaving in a variety of directions for destinations around the country in the morning, and the members of Music City Baroque had a performance at The Frist the next day to rest up for.

In many conversations around the hall I heard talk about “next year’s festival” as participants offered suggestions for repertoire or personnel, enthusing over the experience of the weekend and already savoring the thought of another event.  Nashville owes a debt of gratitude to Lipscomb University for hosting our first Early Music Festival, and to Francis Perry, Dustin Williams, and Mitzi Matlock, who brought it into being.