Earlier this year Roger founded the Nashville Concerto Orchestra, which performed an inaugural concert of works by J.S. Bach, Haydn, and Vivaldi on June 25.  The NCO is dedicated to presenting quarterly concerts of music from the concerto literature featuring local musicians and soloists. Read more about the philosophy behind the Nashville Concerto Orchestra and their first program here.

The NCO’s second program will focus on a new work by a local composer: Michael Alec Rose is Associate Professor of Composition at Blair School of Music, where he has taught since 1986.

“I composed (the concerto) for Felix in 2012,” said Michael, “and then we premiered it on a so-called Nightcap concert – we used to have this series called Nightcap which featured faculty performers – it was in January of 2013. We did it in the piano version – Felix was extremely good-natured and patient with me!”

“It’s a single movement concerto with lots of changes of tempo, lots of different sections. The opening few seconds is kind of nightmare itself! although the nature of the piece is actually quite lyrical even Romantic – I hope in the best sense, with a capital ‘R’.”

“There are more difficult cello pieces, but in terms of sustaining a singing voice, that is what this piece is about.” said Michael.

the first page of the manuscript of Sedentary Dances

Felix Wang is Professor of Cello at Blair School of Music, cellist for the Blair String Quartet, and a founding member of the Blakemore Trio.

“It’s such natural writing,” said Felix, “not only does it lie really well (on the instrument) – not meaning that it’s easy but it makes sense cellistically – you start playing and you think ‘this really shows the instrument off nicely’. It shows an understanding of the voice itself and its capabilities, and what expressive qualities it can produce on the stage. I think Michael is the perfect composer for the cello.”

“(Sedentary Dances) is really a wonderful piece, and I’m very excited to come back to it. It’s so well-written for the cello, so expressive, with lyrical writing using the different ranges of the instrument – it’s very satisfying to play as a cellist.”

Michael describes the concerto – “dances sitting down” – as exploring the paradox between the “stillness of the person and the vitality of the sound”. As it is a collection of dances, I asked him if it was conceived in the manner of a baroque dance suite. He said that he didn’t consciously compose it that way, but the concerto does have a sarabande-like period in the middle and ends with a gigue or tarantella in C Major.

Felix and Michael premiered Sedentary Dances its version for cello and piano in 2013, but Michael had always envisioned the piece as a concerto for cello and orchestra. So with the October orchestral premiere looming, he spent six weeks this summer orchestrating the concerto at the rate of twelve measures a day. “I knew exactly what I wanted, but I just had to get it down.” he said.

“It’s like clockwork, it’s like a factory. It takes hours. At 12 measures a day you can do 450 measures in the space of six weeks.

“The first page took a week! This whole idea of making the music sound horrible, or primitive, or chaotic, requires the utmost care and sophistication. It’s a paradox that you live with as a composer.

“I have colleagues, even external reviewers of my work, who feel that my music is simply too conservative – not advanced enough tonally. This is piece is in C Major, ultimately! But it’s like what Schoenberg said: ‘there are plenty of pieces left in C Major’. I was listening to Uncle Arnold too, he wasn’t dogmatic about twelve-tone music, he thought that it would kick in for everybody, but he wasn’t sure, and he was perfectly prepared to admit that his tennis partner Gershwin was doing a pretty good job!

“So, the concerto is a way of addressing my sense of faithfulness and wonder about the entire range of lyrical music, from Schoenberg to Gershwin. They’re on the same tennis court in Hollywood! But they basically run the gamut, as well as to the net.”

Indeed, it’s a long journey from Porgy and Bess to Moses and Aron.

On October 19, the Nashville Concerto Orchestra will be conducted by Joseph Lee, a graduate of Blair School of Music with a broad portfolio of conducting experiences. Joseph currently serves as Music Director of the Huntsville Youth Orchestra.

The program of the concert will consist of two performances of Sedentary Dances.

“Playing the concerto twice fulfills multiple functions.” said Roger. “It is new music and by definition folks will not be familiar with it, so it affords our listeners the chance to enjoy it once they have an idea ‘how big the room is and what the color scheme is’.

“Also, it is new to the players and they get to become more comfortable with it and give a more informed performance the second time.”

He concludes his explanation by quoting Heraclitus, “You can’t walk in the same river twice!”

Michael and Felix will discuss the upcoming performance of Sedentary Dances with John Pitcher on his radio show Fearful Symmetries on WXNA 101.5 FM Sunday, October 9 at 10:15 am. 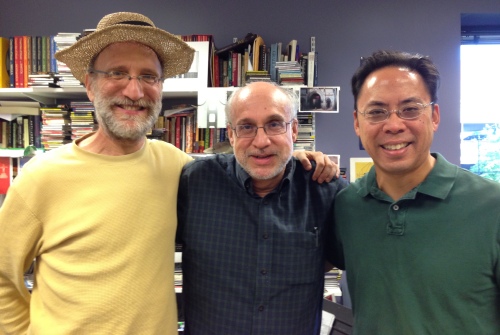