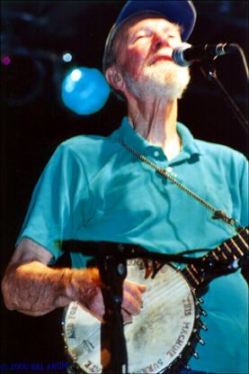 Today is the one-hundredth birthday of the American musician and activist Pete Seeger – Pete was born on May 3, 1919 in Manhattan. Like all Americans, whether we are aware of it or not, Pete’s life and work has had a profound effect on me, and I am grateful. When he finally left us a little over five years ago at the age of 94, Pete had accumulated a lasting  legacy of using music to create positive change in the world that few musicians – or anyone else – can claim to have achieved. We are all so lucky to have shared the world with him.

I was also incredibly fortunate to have the opportunity to perform on stage with him at children’s concerts for Fieldston Outdoors in the early 1990s. Thank you, Pete.

I didn’t really “grow up” with Pete Seeger the way many people my age (and older, and younger) did. What I mean is: my parents didn’t have any of his records nor did they listen to what I grew up thinking of as “folk” music. I only began to become aware of who he was, his life and music, when I was in my late teens and twenties. Pete’s 100th Birthday is an opportunity, for me, to remember him and honor his impact on my life, and on our world. There are many places on the internet where you may learn about Pete, and how his life’s story and his music and his many activities influenced others, how he relentlessly worked to create positive change in our world. Try here, and here, and here. I highly recommend The Power of Song, the 2007 documentary about Pete’s life and music. 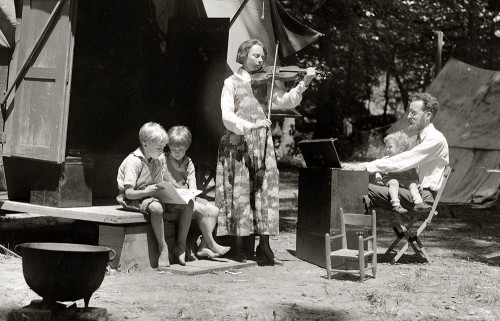 The Seeger family, summer of 1921. Pete is sitting on his father’s lap.

In the early 1990s I lived in metropolitan New York City and for three summers I worked at Fieldston Outdoors, which is an environmentally-themed summer day camp hosted by Ethical Culture Fieldston School in the Bronx. I did a number of things there, including serve as the camp’s music counselor for the summer of 1995 (my final summer at Fieldston), but to me the most important part of my experience at Fieldston Outdoors was the opportunity to participate each summer as a leader in twice-daily music making with the entire camp.

I was a member of this team of musicians each year I worked at Fieldston Outdoors, and the leader of the team in my last summer there (the year I was the music counselor). The team included a diverse array of folk music professionals based in NYC including Jodie Kruskal and Pat Humphries, the outstanding music educator and guitarist Paul Benzaquin, and several others. I learned a lot from working with these musicians: a lot of songs (many of which I incorporated into the music I brought to the children I taught during the school year), as well aspects of practical musicianship like negotiating, compiling good sets, how to set and and break down efficiently, etc.

Fieldston Outdoors had collected a book of camp songs by this point (as music counselor one of my primary functions was to teach these songs to the campers so they could sing them at the singalongs), many of which endorsed the camp’s environmental theme. Long after I left New York, I continued to teach many of these songs to children at schools in Florida, and eventually, Nashville.

Sailing Down My Golden River by Pete Seeger on WNEW, 1984 – a Fieldston Outdoors singalong staple.

A highlight of the summer camp was known as the Weed Wallow. Once each summer, the entire camp boarded school buses and rode upstate to the Beacon Sloop Club, donned swimsuits and life preservers, and spent the morning pulling up the invasive water chestnut plants that clogged the harbor. Then, as the children ate lunch, the camp musicians participated in a singalong concert led by Pete Seeger. 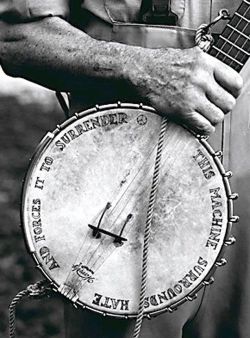 Pete’s banjo – I remember being fascinated by it, my eyes constantly drawn to read the legend painted on it: “this machine surrounds hate and forces it to surrender”

I remember singing in two of these concerts with Pete. To be honest, I was intimidated – I mean, he was Pete Seeger, the dean of American folk music, at that time in his seventies, a communist survivor of the McCarthy era, a musician who changed and shaped the world we live in through his music, his integrity, his Yankee independent spirit.

He was very tall. People know this about him from the photographs but it’s not mentioned much in accounts you read. I stood next to him on stage and he towered over me (I’m 5’8″). Even at that age, he was a powerful man, and though there was nothing threatening about his presence, one was aware of the weight of his experience, all he had done and stood for. He was dressed simply in shorts and a t shirt, and despite the dirty straw hat he wore and its wide brim, he was sunburned. 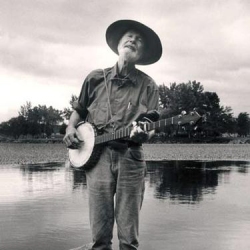 I don’t remember all of the songs we sang with Pete, but I do remember that at one Weed Wallow he told his famous Foolish Frog story – which reputedly he had learned from his father, and the other summer he told Abiyoyo. I played guitar and sang in the Fieldston Outdoors “band” but we had several guitar players, so often I would put mine down and improvise a recorder descant. I remember doing this at one of these singalongs with Pete and he didn’t like the high legato melody I was playing. He looked down at me, took the recorder out of my hands, and said (away from the microphones) “lend your voice instead” and then proceeded to improvise a lively staccato accompaniment on my recorder. I was a bit put out, but not for long. He was Pete Seeger, after all. He was considerably above anything I might think of him or his behavior. We talked a little before and after the sets, but not about anything consequential that I can recall. I remember him telling us about singalongs he hosted at the Beacon Sloop Club, and putting out a general invitation.

Pete was no longer young and his voice was past his prime, but he was a strong presence on stage. As a musician, what impressed me the most at the time was that he was could play the hell out of that banjo. I mean it, he was the best banjo player I had ever heard.

My other memory of him was from the morning before one of the Weed Wallows. I was riding in a bus with a group of campers on our way up to Beacon, and as we neared our destination our route took us through the woods right by Pete’s famous house, which he built himself. As our bus caravan drove past, Pete was out in the yard, swinging an axe, splitting logs. There was a huge pile of split wood scattered around him on the ground, and he didn’t look up nor was there any interruption to the pace of his work. He was deeply engaged in his daily meditation practice.

What I learned from Pete

I learned some important things from Pete – life lessons that all of us who shared the planet with him and were paying attention learned. I also learned – and not incidentally either – a lot of songs which added charm, whimsy, depth, fun, and connection with others to my life.

My brief experiences singing with Pete and my immersion for three summers in the singing culture at Fieldston Outdoors brought a wealth of American folk music to my repertoire as a musician, as a music teacher, and as a parent. When our children were young, we played several of his recordings regularly on car trips and when we listened to music with them at home. Our favorite was Children’s Concert at Town Hall from which we learned many wonderful folk songs. We sang these with our children ourselves, and not only when we were playing the recordings. Several of these songs made their way into the repertoire of songs I sang with students in my work in the classroom.

Pete Seeger and Bruce Springsteen perform This Land is Your Land by Woody Guthrie at the Inauguration of President Barack Obama, January 20, 2009.

Pete’s life was woven into so many important stories of twentieth century American history – communism and the McCarthy era, the civil rights movement, environmentalism and the power of grassroots activism… In my work was a music teacher, it was natural to use Pete as a main character when telling the stories of several important songs that I tried to bring to every student, songs like This Land is Your Land and If I Had a Hammer. In my opinion, if you teach music to children in the United States, it is your responsibility to bring these songs to your students, even if you don’t teach them any others from Pete’s repertoire (which is unlikely).

Pete performs If I Had a Hammer in the early 1960s.

More than anyone else, Pete taught me the power of singing to build community, and I strove to live this ideal in my work in every teaching position I held throughout my teaching career. Holding a repertoire of songs in common with others and singing them together on a regular basis builds community and compassion between others despite cultural, religious, political, and economic differences. This is one of the most important aspects and responsibilities of the music teacher in a school environment.

For us all, Pete Seeger was that rare example of a human being who lived authentically. He always stood up for what was right and used his music as a power for good.

Related articles on Off The Podium:

Is Music a Commodity?