John Holbrook “Jack” Vance was born in San Francisco on August 28, 1916. He spent most of his early life in California, and graduated from the University of California, Berkeley, in 1942, where he studied mining engineering, physics, journalism and English.

Although most people know Jack Vance as a writer of science fiction, fantasy, and mystery novels, he was truly a Jack-of-all-trades, working at many different occupations before, during, and after college, including a stint in the Merchant Marines. He worked as a bell-hop, in a cannery, on a gold dredge, as a seaman, a rigger, a surveyor, a ceramicist, and a carpenter. He worked as an electrician in the naval shipyards at Pearl Harbor, where after serving on a degaussing crew for a period, he left about a month before the Japanese attacked in 1941.

The Dying Earth, 1970s paperback cover ~ this is what my first Jack Vance novel looked like

He married Norma Genevieve Ingold in 1946 and they remained together until her death in 2008. The couple settled in Oakland, raised a family, and traveled extensively. Jack was a lifelong sailor and spent much of his life both working and recreating on boats. Jack and Norma sailed around the world to places like Ireland and Tahiti, and even lived on a houseboat on Lake Nagin in Kashmir.

Jack loved music, especially Dixieland and traditional jazz, and he played a number of instruments recreationally. His first published writings were jazz reviews for his college newspaper. He began writing and publishing stories in the 1940s, but was only able to establish himself as a full-time writer in the 1970s.

He counted science fiction celebrities Frank Herbert and Poul Anderson among his closest friends, and wrote across seven decades – Jack’s influence can be discerned in and has been acknowledged by many writers who may be more well-known. The Dying Earth alone and its unfathomably far-future setting established a science fiction subgenre that has been exalted by the likes of Gene Wolfe (The Solar Cycle), Dan Simmons (Hyperion), and others.

Jack Vance at the helm of his boat in San Francisco Bay, early 1980s ~ photo by David M. Alexander

Jack died on May 26, 2013, of natural causes. He was old! and had lived a long, sprawling, imaginative, and productive life. A memorial website was raised in his honor at Foreverness – check it out! Leave a remembrance, or a toast, if you feel inclined. And if you’re a fan of Jack’s stories, you might enjoy the FaceBook group By NO Means! A Jack Vance appreciation society. – a small but dauntless band of internet adventurers.

I wrote briefly about Jack in My Top 21 Science Fiction Novels of All Time earlier this year. Shortly afterwards I noticed that Jack’s centennial was approaching, and planned to mark it with some kind of tribute here. I have been reading Jack’s books since the 1970s – and although he has been an important influence on my life, I am pretty much of the opinion that he is not very well known – not anything like he should be. I have never actually met anyone who has read his books before! unless I was the one who introduced them to him.

Besides The Dying Earth novels I first read when I was about 12, I picked up paperback copies of Jack’s science fiction and fantasy novels when I found them at used book stores, from my teens well into my thirties. My wife and I were especially captivated by Suldrun’s Garden – the first novel of the Lyonesse trilogy – when when we found it in the stacks at some used book emporium sometime in the late 1980s.

some of my Jack Vance books

In the 1990s I started to pick up hardcover copies of Jack’s novels when I came across them and, when ORB started publishing omnibus volumes of Jack’s work, I bought every one I could find – Tales of the Dying Earth, The Demon Princes, Planet of Adventure, Alastor – my aging eyes appreciate the larger format and it’s great to have these stories together with the others they belong with. In all I have read well over 30 of Jack’s more than 40 books – most of his science fiction and I believe nearly all of his fantasy. Most of them I have read more than once, too – there is something about Jack’s stories that continues to draw me back, usually in periods of my life when I am feeling personally or professionally stressed. Something about Jack’s unique style is therapeutic for me, and provides a healing form of escapism and entertainment which brings me respite and catharsis.

There are many aspects of his writing that I enjoy – the intricate plots, his seemingly unlimited and astounding invention, elaborate descriptions of far-future societies – but probably the thing I love about Jack’s books the most is that his characters say the damnedest things. For instance, at the very beginning of The Dying Earth, when Turjan of Miir asked Pandelume for the “master-matrix” that binds and orders the patterns that would allow him to create humanity in his vats,

“Willingly will I aid you,” said Pandelume. “There is, however, another aspect involved. The universe is methodized by symmetry and balance; in every aspect of existence is this equipoise observed. Consequently, even in the scope of our dealings, this equivalence must be maintained, thus and thus. I agree to assist you; in return, you perform a service of equal value for me. When you have completed this small work, I will instruct and guide you to your complete satisfaction.”

His stories are full of speeches like this: theatrical soliloquies or arch dialogue full of high-flown language out of the mouths of colorful characters in – often as not – archetypal situations. It is these speeches I love the most when I come across them – all action stops for a moment and they bubble off the page, sometimes making me laugh out loud. 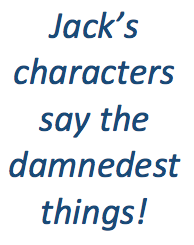 Jack held his cards close to his vest most of the time – he does not directly reveal his own opinions or deeply held convictions through the things his characters say, but rather more by their actions. His characters are not usually as complex as those of some of his contemporary or later science fiction writers, nor do they grapple with the kinds of dilemmas faced by post-modern anti-heroes. Jack’s characters usually operate from clear motives, and his heroes are virtuous in an old-fashioned way. The plots of his stories often follow a character working out a simple problem through a long journey of many episodes and adventures, peopled by colorful characters, exotic locales, strange monsters, and societies with outlandish customs. His ability to come up with fantastic new bottles for his old wine was seemingly without limit! and a great part of why his books are so entertaining.

Perhaps the closest Jack came to baring his heart is in his final novel Lurulu, which he dedicated to his wife Norma. The book’s protagonist Myron Tany travels through the vast Gaean Reach having adventures in his space yacht – a typical Vancian conceit for a story. Myron grapples with the concept of lurulu, variously described throughout the book by different characters without ever truly being defined. Here Captain Maloof is addressing the crew of the Glicca:

“…after Coro-coro we must fare onward to Cax. Thereafter, who knows? I can make no prediction; we are like the romantic vagabonds of old, each searching for lurulu.”

Cooper called out: “The place is unknown to me! What, or where, pray, is ‘lurulu’?”

” ‘Lurulu’ is a special word from the language of myth. It is as much of a mystery to me now as when I first yearned for something which seemed forever lost. But one day I shall glance over my shoulder, and there it will be, wondering why I had not come sooner.”

Towards the end of the novel, Myron, Maloof, Schwatzendale, and Wingo habitually sit in a dim old library after formal dinners,

…where a fire burned in the stone fireplace, and chairs upholstered in soft leather awaited their coming. Decanters charged with spirits, essences, and distillations of notable marks were ready at hand…Conversation touched upon many topics and often continued into the late hours. Profundities sometimes entered the conversation, usually in response to Wingo’s predilection for abstruse philosophy…

“…we were speaking of lurulu. At the risk of banality, I will point out that ‘fate’, ‘destiny’, and ‘lurulu’ are not synonymous. ‘Fate is dark and ponderous; ‘destiny’ is more like a beautiful sunset. In speaking of ‘lurulu’, however, language of this kind is not useful. Lurulu is personal; it is like hope, or a wistful longing, more real than a dream.”

Thanks for a great 100 years, Jack. I hope you found your lurulu.

By walterbitner in Off Topic on August 28, 2016.
← Announcing the Accelerando Inaugural Class Masterclass with Simone Porter, October 27 →