Today is March 7, the birthday of French composer Maurice Ravel. I remembered this because last night I was reading Jean Echenoz’s terrific biographical novel – unsurprisingly titled Ravel – and came across the passage in Chapter Five when the protagonist celebrates his fifty-third birthday with a big crowd in New York that includes George Gershwin, who played The Man I Love for him.

Although perhaps not a constant presence, Ravel’s music has been an important and recurring strand in the web of my musical life.

Do you like Ravel? I think it’s interesting that we understand this question to mean “Do you like Ravel’s music?”, as if the man and the music he wrote were the same thing.

I’ve never met anyone who admitted that they didn’t like Ravel’s music.

Ravel by Jean Echenoz is a unique bauble of a novel that describes the last ten years of Ravel’s life in nine short chapters. The entire book is barely more than a hundred pages long, and could be read in a single sitting (I read it in two). Echenoz describes the man Ravel, his surroundings, his activities, the people in his life in minute and keenly observed detail. There is almost no dialogue to speak of, and the few snippets of words spoken by the characters are delivered without quotation marks. The book flies by yet somehow leaves an indelible impression of Ravel the human being, and yes, Ravel the music. If you like Ravel or you like books, I can highly recommend this one – it’s like nothing I’ve ever read before. My son loaned it to me – he is also a musician who likes books – so I am just passing it on.

“Did you ever do it to Ravel’s Bolero?”  One of my early impressions of Ravel’s music was in this famous scene from Blake Edwards’ 10, which was released when I was 13 years old. To this day I still associate Bolero with this scene, and think of Bolero as a metaphor as alluded to by Bo Derek’s  character. It’s probably not what Ravel intended, but it’s a cultural accretion that has become attached to the piece for many of my generation and older, the way that many who went to college in the late 1990s associate Pink Floyd’s The Dark Side of the Moon with The Wizard of Oz.

When I was seventeen (this was in 1983), my piano teacher Gary Davenport invited me into his kitchen after a lesson. He brewed a bodum of coffee and pulled out a brand new Deutsche Grammaphon release (still in its shrink wrap) by the then young pianist Ivo Pogorelich, which he proceeded to put on the turntable. Ivo was the hottest young pianist on the recital circuit at that time. When I attended a solo recital he gave at the Herkulessaal in Munich two years later the recital hall was flooded with young women who piled dozens of flower bouquets all over the stage and wept openly as he played.

We listened to the entire side A and sat at the kitchen table to drink Gary’s strong, dark brew. Gary chain-smoked More cigarettes and I picked the occasional coffee grind out of my teeth as I got my first concentrated dose of Ravel: Gaspard de la Nuit (1909), in one of the most riveting performances I have ever come across. I’ll never forget it. The third movement Scarbo was intentionally written by Ravel to be so hard to play that it would eclipse Islamey by Mily Balakirev in difficulty (reputedly Islamey was considered to be the most difficult piano piece ever written at that time). Scarbo is famous for this, and for the dark, terrifying musical world it inhabits .

Ivo Pogorelich performs Gaspard de la Nuit by Maurice Ravel, filmed sometime in the early 1980s. Scarbo is at 14:24. It really is astounding: both the piece, and this performance.

I learned to play several of Ravel’s piano pieces when I was in my late teens and early twenties, some of them well enough to perform on recitals, but I never felt satisfied with these performances. (No, I never attempted to learn Gaspard de la Nuit.) Ravel’s music belongs to its own world, a world very far away from that of composers like Beethoven and Brahms, which I spent a lot of time on in those days. Unsurprisingly, Ravel disliked Beethoven’s music – but he revered Bach.

Around the same time that Gary introduced me to Gaspard I bought a cassette I found in the bins at Tower Records in Los Angeles with Debussy’s String Quartet on one side and Ravel’s on the other (I don’t remember who the quartet was and the cassette has long since left my possession). I listened to this cassette obsessively for months, and credit it with kickstarting my lifelong love of the string quartet literature. Both pieces are among my very favorites, and Ravel’s quartet especially haunts me – I find myself seeking out a half hour to listen to a recording of it several times each year. The second movement Assez vif will just start playing in my head without any prod from the outer world that I am aware of.

He has always taken care with the selection, maintenance, and replacement of his clothes. When not following the latest fashions, he invariably precedes them: he was the first in France to wear pastel shirts, the first to dress entirely in white if he so chose (pullover, trousers, socks, shoes), and he has always been most attentive and particular on this point. 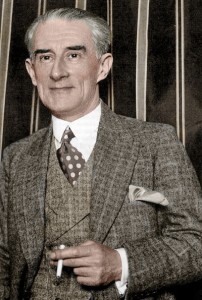 Ravel was a small, fussy man and a fastidious dresser: a dandy. He was a lifelong smoker of Gauloises, like his peers Picasso, Sartre, Camus. Cocktails, fine wines, the rituals of French food were an integral part of his daily life. Raised Catholic, as an adult he was an atheist. He loved to read and collected books. He never married, but although people have speculated that he may have been gay, there is little evidence to support this.

He created his own unique, colorful, world through the music he composed, the clothes he wore, the home he decorated, and the people he surrounded himself with… it captivated the world – and still does today.

His music is at once profoundly intellectual yet inspires the imagination and the feelings intensely.

His music careers between the delicate and the visceral, the tender and the brutal, yet always is drawn with utmost attention to detail, precision, artistry.

Ravel’s attitude to composition is unique. He seemed to approach each piece he wrote as a problem or a puzzle to be solved – perhaps this is why so much of his catalog consists of single examples for each kind of piece he wrote.

He spoke to friends about writing an opera on Jeanne d’Arc, but he never did. That is the opera that I want to hear. 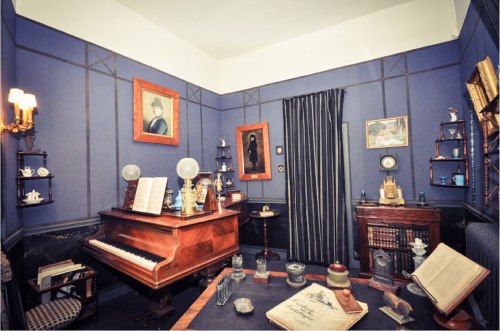