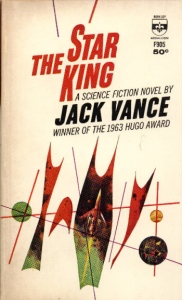 The Star King is the first novel in the five book series The Demon Princes by the prolific American writer Jack Vance:

The Demon Princes are vintage Vance – in a long, convoluted plot worthy of Dumas, protagonist Kirth Gerson hunts down and assassinates each of the five criminal masterminds who murdered or enslaved everyone he knew as a child. The Demon Princes are in turn only five of many novels set in Vance’s fictional Gaian Reach, a fictional future region of space colonized by humans. He wrote both standalone novels, and series of novels set in the Gaian Reach, including:

Vance’s work is hugely entertaining and far flung: he wrote more than 40 novels, including many science fiction novels (and several other series) not set in the Gaian Reach world. He wrote fantasy as well as science fiction – most notably the Lyonesse trilogy – but he is probably best known today as the author of The Dying Earth (1950). This “science fantasy” is a loosely connected series of stories in a far, far future earth peopled by magicians and thieves. The “system” of magic Vance describes in the book became the basis of the magic system for the original Dungeons & Dragons game developed by Gary Gygax in the early 1970s. Vance went on to write several sequels to The Dying Earth featuring Cugel the Clever, a strangely sympathetic, ironic failure as a thief and a miscreant.

Vance’s books do not feature the depth of character or seriousness shared by many of the other novels on this list. Characters relate to each other with a degree of formality, and the stories often display theatricality, seemingly unlimited invention, wit, verve, irony, social criticism, and an erudite and amusing vocabulary. He is one of my favorite writers – don’t miss him. You can read the tribute to Jack I wrote for his 100th birthday here: