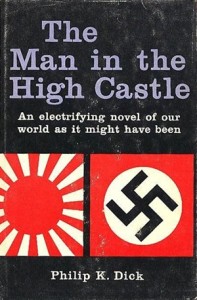 For many years, Philip Kindred Dick was considered an “underground” writer. Yet his influence on his peers and on following generations has been incalculable, and slowly but steadily over the years the profound impact of his stories on our culture has been growing.

To say that Dick was ahead of his time would be an understatement – today he is generally regarded as a sort of prophet of the postmodern in science fiction.

He was born in Chicago, and lived in San Francisco and Washington D.C. when he was growing up. His twin sister died at six weeks, which affected him profoundly. Dick graduated from Berkeley High School (California) in the same class as Ursula K. LeGuin, although they did not know each other at the time.

Dick seems to have spent most of his adulthood in pretty dire straits. He dropped out of college due to anxiety issues, and continued to have mental health problems throughout his life, including an unsuccessful suicide attempt in 1972. He was married five times, spent much of his life in poverty, and struggled with drug abuse.

Many of Dick’s stories question reality and reflect his own paranormal experiences, paranoia, and hallucinations. Often they depict a downtrodden everyman character struggling under the weight of oppressive forces beyond his control.

The Man in the High Castle is now one of the most famous novels in the alternate reality or alternate history subgenre of science fiction. Set in 1962 in the former United States, it imagines a world in which World War II was won by the Nazis and Imperial Japan, who have divided the world between the two empires. Dick used the I Ching to guide his own decisions about the plot of the novel, as his characters within the novel also use the I Ching.

I have read a handful of his books over the years, although not as many as I would like. In general, it’s pretty strong stuff!…and can feel bewildering at times. A few other titles I can recommend include:

Jonathan Lethem and Kim Stanley Robinson discuss the influence of Philip K. Dick on their own work

Footnote for lutenists: Dick features references John Dowland and his music in several works – Flow My Tears, the Policeman Said (1974) even references Dowland’s best known composition in the title.