12 – The Left Hand of Darkness 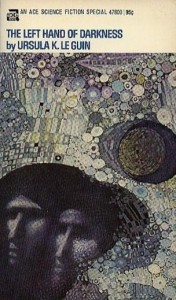 This is the book that established Ursula K. LeGuin‘s reputation – today she is regarded as one of the most important authors in the genre. She is largely responsible for bringing feminism and gender to the table as important themes for science fiction writers, and has had a long career, producing not only great science fiction, but also fantasy: novels, stories, poetry, essays, and children’s books.

The Left Hand of Darkness is part of what is called by some the Hainish Cycle (not by LeGuin herself, who denies that the books relate to each other coherently enough to be considered a cycle or series). The books of the Hainish Cycle are loosely related in that they occur in a fictional future in which humans have settled on various planets throughout the galaxy in the distant past, and are beginning to contact each other and establish diplomatic relations after a long period of time with no contact or travel between worlds.

There are a number of short stories set in the worlds of the Hainish Cycle, which however have not as of this writing been collected into one volume, but are scattered throughout several different volumes of stories published over the years.

In The Left Hand of Darkness, Genly Ai from Terra arrives as an envoy on the planet Gethen, hoping to persuade the inhabitants of Gethen to join the Ekumen, a galactic confederation. The people of Gethen are androgynous, with no fixed gender – when they mate once a month, their gender depends on who they choose to mate with. Much of the novel describes Genly Ai’s attempt to navigate and understand Gethen culture and customs, including religion as well as sexuality – thereby casting a light our on own culture and customs, and drawing into question many aspects of what it means to be human.

LeGuin’s prose is elegant and beautiful, and The Left Hand of Darkness is one of the most thought-provoking novels ever written.