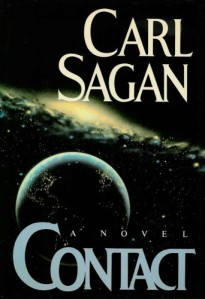 I first heard of the astronomer Carl Sagan when I was a teenager – his television series Cosmos aired on PBS when I was 14. For many of us, Dr. Sagan was the archetype of the scientist as philosopher and teacher – a deeply sympathetic figure whose humanist vision of science touched millions of people – Cosmos has been seen by at least half a billion people around the world, more than any other series in the history of public television.

Sagan taught and performed research at Harvard and at Cornell, where he received tenure. He also served as an advisor to NASA. Although he was an immensely prolific writer, and wrote many popular science books as well as hundreds of scientific papers, Contact was his only novel.

The importance of his contributions to science and towards increasing a popular understanding and enthusiasm for science can hardly be overestimated. His media activities endeared him to millions of people, but they also generated professional jealousy among some of his peers.

Sagan was best known for his interest and research into the possibilities of extraterrestrial life, and Contact is Sagan’s imagined description of how we might meet aliens for the first time. In Contact, it is the extraterrestrials who are more advanced than the humans. It’s a terrific read and reveals Sagan’s deep, impassioned humanity, and his vision of science as a power for good.