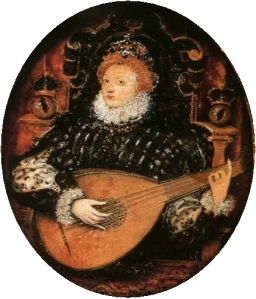 The reign of Queen Elizabeth I – an astounding 45 years from 1558 to 1603 – is often referred to as the Golden Age of English history. The long rule of the Virgin Queen brought momentous advances for England: colonization of the New World and circumnavigation of the globe by English privateers, the dramatic defeat of the Spanish Armada in 1588, Elizabeth and her advisors’ miraculous achievement of reestablishing and maintaining a Protestant state for nearly fifty years in the face of continental Catholic opposition.

England brought forth an artistic and cultural flowering under Queen Elizabeth – most famously in the development of the theatre and the work of the playwright William Shakespeare, whom she patronized. Music, too, flourished during the Golden Age: English musicians were renowned not only at home but abroad for their excellence and virtuosity, and the Queen herself not only patronized court musicians, she played the lute herself.